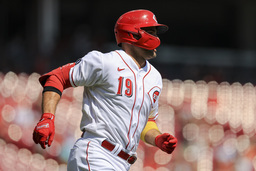 Cincinnati Reds' Joey Votto runs the bases after hitting a two-run home run during the first inning of a baseball game against the Pittsburgh Pirates in Cincinnati, Monday, Sept. 27, 2021. (AP Photo/Aaron Doster)