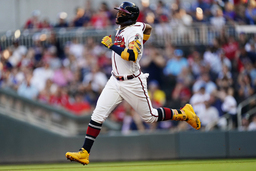 Atlanta Braves' Ronald Acuna Jr. runs to second base after hitting a double in the first inning of the team's baseball game against the Boston Red Sox on Wednesday, June 16, 2021, in Atlanta. (AP Photo/John Bazemore)