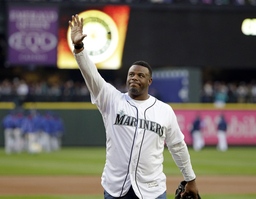 FILE - Former Seattle Mariners outfielder Ken Griffey Jr. waves to fans after being introduced before a baseball game against the Texas Rangers in Seattle, in this Friday, April 14, 2017, file photo. Hall of Famer Ken Griffey Jr. is investing in the Seattle Mariners in a way he never has before. Hell be part of the ownership going forward. The Mariners announced Monday, Oct. 25, 2021, that their most famous former player has also become the first one to purchase a stake in the ball club. (AP Photo/Elaine Thompson, File)