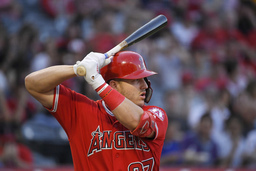 In this July 25, 2019, file photo, Los Angeles Angels' Mike Trout bats during the first inning of the team's baseball game against the Baltimore Orioles in Anaheim, Calif. Sixty-five players would earn at least $100,000 each time their team wins or loses if the pandemic-delayed major league season get under way, according to an analysis of their contracts by The Associated Press. Trout's salary works out to $222,222 for each game of the 162-game season. (AP Photo/Mark J. Terrill, File) 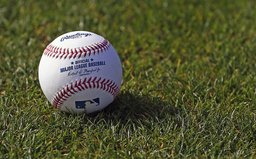 In this Feb. 17, 2017, file photo, a baseball is shown on the grass at the Cincinnati Reds baseball spring training facility in Goodyear, Ariz. Major League Baseball rejected the players' offer for a 114-game regular season in the pandemic-delayed season with no additional salary cuts and told the union it did not plan to make a counterproposal, a person familiar with the negotiations told The Associated Press. The person spoke on condition of anonymity Wednesday, June 3, 2020, because no statements were authorized. (AP Photo/Ross D. Franklin, FIle) 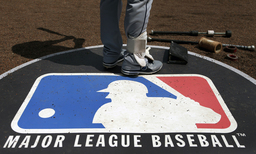 In this April 24, 2013, file photo, Cleveland Indians second baseman Jason Kipnis stands on the Major League Baseball logo that serves as the on deck circle during the first inning of a baseball game between the Chicago White Sox and the Indians, in Chicago. Major League Baseball rejected the players' offer for a 114-game regular season in the pandemic-delayed season with no additional salary cuts and told the union it did not plan to make a counterproposal, a person familiar with the negotiations told The Associated Press. The person spoke on condition of anonymity Wednesday, June 3, 2020, because no statements were authorized.(AP Photo/Charles Rex Arbogast, File)

NEW YORK (AP) The New York Yankees, Houston Astros and Los Angeles Dodgers would each save more than $100 million on player salaries as part of management’s proposal to start the coronavirus-delayed season than they would under the union's plan, according to an analysis by The Associated Press.

Top stars accustomed to eye-popping salaries that set them apart from mere All-Stars would experience by far the steepest cuts. Set to earn $36 million each, Mike Trout and Gerrit Cole would get $25.3 million under the union’s plan and a base of $5.6 million under the team’s proposal with the chance to get back to about $8 million if the postseason is played. A rookie at the minimum would get $396,537 from the union plan and $256,706 from the MLB proposal - not much more than the $222,222 per game Trout and Cole originally were slated to earn.

Lower-spending teams save, too, but not nearly as much because their starting points are lower. Miami is at $33 million under the union’s plan and $16 million under MLB’s. Pittsburgh’s salaries would drop from $36 million to $17 million and Baltimore’s from $43 million to $18 million.

to accept prorated shares of their salaries during a shortened season, part of a deal that guaranteed $170 million in advances and service time even if the season is scrapped. More than 100 players gathered for a digital meeting Thursday and reaffirmed their stance against additional cuts.

Philadelphia catcher J.T. Realmuto’s $10 million salary would drop to a $2.4 million base as part of the MLB proposal and to $7 million under the union plan.

Milwaukee pitcher Brett Anderson would fall from $5 million to $1.4 million in MLB’s plan and to $3.5 million in the union’s formula.

“Interesting strategy of making the best most marketable players potentially look like the bad guys,”

after MLB made its proposal.

MLB and the union have been making plans to start the season next month in ballparks without fans, and teams say they will sustain huge losses. In response to the union’s stance, MLB is considering proposing a much shorter schedule,

The pandemic-induced stoppage has wrecked baseball’s finances. MLB say that by playing in empty ballparks, teams would combine to lose $640,000 for each additional regular-season game.

Teams also say they fear extending play deep into the fall, as the union proposes, would risk a second wave of the coronavirus that would prevent the postseason from being played.

Both sides have said they hope to start the season around the beginning of July, and talks may intensify next week. Some on the players’ side fear teams may attempt to implement a relatively short schedule, which could provoke the threat of a grievance and to play while seeking money damages.

The AP study looked solely at 2020 salaries and did not include prorated shares of signing bonuses, which are guaranteed when a contract is signed and approved by the commissioner’s office.

starting at 10% and rising to 90% for the amounts of salaries above $10 million, followed by prorating based on an 82-game season.