Not in Missouri anymore: Royals move legal home to Delaware 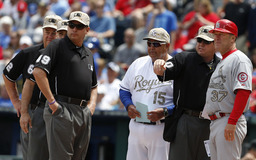 In this May 27, 2013, file photo, Kansas City Royals bench coach Chino Cadahia (15) and St. Louis Cardinals first base coach Chris Maloney (37) exchange line-ups with home plate umpire Rob Drake (30) before a baseball game at Kauffman Stadium in Kansas City, Mo. The exchange of lineup cards would be eliminated, fielders will be encourages to space themselves from baserunners between pitches and managers and coaches must wear masks while in the dugouts under Major League Baseball's proposed operations manual for starting the coronavirus-delayed season. (AP Photo/Orlin Wagner, File)

SAN FRANCISCO (AP) The Kansas City Royals have moved -- not actually, but legally.

The Royals changed their legal home from Missouri to Delaware last fall during the process of the team's sale from David Glass to a group headed by John Sherman. The switch was mentioned Monday in a filing with the 9th Circuit U.S. Court of Appeals by Major League Baseball's law firm in its defense of a lawsuit by minor leaguers claiming they are not being paid minimum wage.

Sherman's group acquired 100% of Kansas City Royals Baseball Club LLC on Nov. 25, a deal thought to be valued at $1 billion. The LLC becomes a defendant in the suit.

An unopposed motion to substitute parties was filed by Proskauer Rose.

Many entities maintain a legal base in Delaware. The Royals have a Class A minor league team in Wilmington