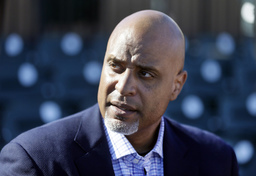 In this March 17, 2015, file photo, Major League Baseball Players Association executive director Tony Clark talks to the media before a spring training exhibition baseball game in Lakeland, Fla. Major League Baseball players are upset over the prospect teams may seek additional pay cuts if games are played in empty ballparks due to the coronavirus outbreak. Players recently reached an agreement with Major League Baseball that outlines economic terms for resumption of play, which included significant salary adjustments and a number of other compromises. That negotiation is over, union head Tony Clark said in a statement Monday, April 20, 2020. (AP Photo/Carlos Osorio, File)

NEW YORK (AP) Major League Baseball's players proposed a 114-game regular season Sunday, up from 82 in management's offer, and no additional pay cuts beyond the one the agreed to in March, a person familiar with the plan told The Associated Press.

The person spoke on condition of anonymity because no details were announced.