Ohtani bounces back with go-ahead run as Angels edge Astros 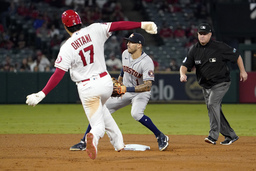 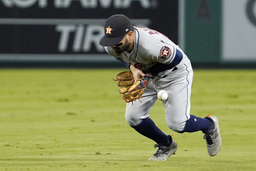 Houston Astros second baseman Jose Altuve bobbles a ball hit by Los Angeles Angels' Jack Mayfield during the sixth inning of a baseball game Thursday, Sept. 23, 2021, in Anaheim, Calif. Mayfield was safe at first on the play and Altuve was charged with an error. (AP Photo/Mark J. Terrill) 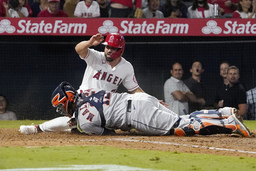 Los Angeles Angels' Jack Mayfield, top, is tagged out at home by Houston Astros catcher Martin Maldonado while trying to score after Jose Rojas was safe at first on a fielding error by second baseman Jose Altuve during the sixth inning of a baseball game Thursday, Sept. 23, 2021, in Anaheim, Calif. (AP Photo/Mark J. Terrill) 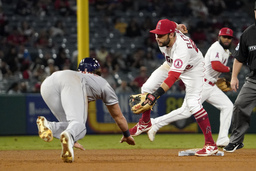 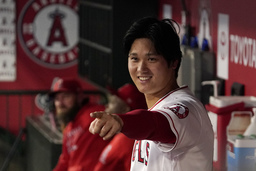 Los Angeles Angels designated hitter Shohei Ohtani gestures to other players in the dugout during the first inning of a baseball game against the Houston Astros Thursday, Sept. 23, 2021, in Anaheim, Calif. (AP Photo/Mark J. Terrill) 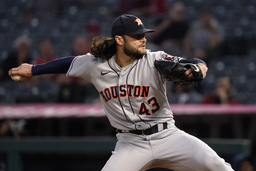 The two-way star from Japan tried to score the winning run during Wednesday's 9-5 loss to Houston in 12 innings, but was called out after a perfect throw from right fielder Chas McCormick. One night later, Ohtani helped the Angels avoid their first four-game sweep against the Astros since 2013, keeping Houston's magic number at three for clinching the AL West.

The game was tied 1-all in the sixth inning when Mayfield lined a double down the left-field line off Lance McCullers Jr. (12-5) to score Ohtani and Jared Walsh. Mayfield had six RBIs in the series against his former team.

''He shows up every day and takes good at-bats,'' Los Angeles manager Joe Maddon said. ''The guy's a survivor and he's done a great job with this opportunity.''

Ohtani got aboard on a one-out walk when ball four was just below the strike zone. He stole second, but that was challenged when it appeared shortstop Carlos Correa might have tagged Ohtani before his foot reached the bag. Umpires upheld the call.

''I think if you guys are asking, you know,'' McCullers said about the walk. ''Not only that, but clearly he was out at second. When the game is affected by the guys not playing it, it sucks.''

Ohtani has 24 stolen bases this year. He is the fourth player in American League history to have at least 45 home runs and 24 steals in one season, joining Jose Canseco, Ken Griffey Jr. and Alex Rodriguez.

The Angels also snapped an eight-game skid at home, their longest since 1994.

Jason Castro smashed a pinch-hit homer to center with two outs in the ninth off Raisel Iglesias to draw Houston within a run. It was the second straight night Castro went deep against his former club.

Jose Altuve followed with a bloop hit before Iglesias got Jose Siri on a check-swing third strike to stop Houston's four-game winning streak.

Iglesias picked up his 33rd save, which is second in the American League. Austin Warren (2-0) worked 1 1/3 innings of scoreless ball.

Alex Cobb had his second straight solid start for Los Angeles since coming off the injured list. The right-hander gave up only one run on four hits and struck out four in 5 2/3 innings after throwing five innings of shutout ball last Thursday against the Chicago White Sox.

''He was spotting his fastball away and had a good split-finger,'' Astros manager Dusty Baker said. ''He was sharp and he has good stuff. He's been pitching well against more than just us.''

McCullers, who had gone 3-0 in his last six starts, took his first loss since Aug. 15 against the Angels. The right-hander went six innings and allowed three runs on two hits with five strikeouts.

Houston had the bases loaded with one out in the fourth but couldn't get anything across. Yuli Gurriel was called out on strikes and Correa grounded into a fielder's choice.

The Angels took a 1-0 lead in the bottom half on Walsh's sacrifice fly.

Houston tied it in the sixth on Correa's two-out RBI single.

Astros: DH/OF Yordan Alvarez did not play due to general soreness. ... RHP Ryne Stanek was reinstated from the paternity list. ... RHP Jake Odorizzi (right foot soreness) is scheduled to come off the injured list Sunday and start at Oakland. ... Baker refused to say if OF Michael Brantley (right knee discomfort) is likely to come off the IL before the end of the regular season. ... RHP Pedro Baez (right shoulder soreness) will make at least one rehab appearance at Triple-A Sugar Land.