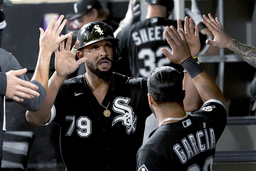 Chicago White Sox's Jose Abreu is congratulated in the dugout after scoring on a single by Yasmani Grandal during the sixth inning of the team's baseball game against the Los Angeles Angels on Wednesday, Sept. 15, 2021, in Chicago. (AP Photo/Charles Rex Arbogast) 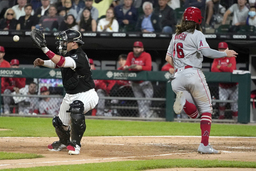 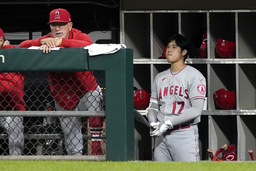 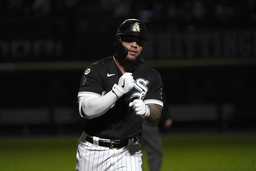 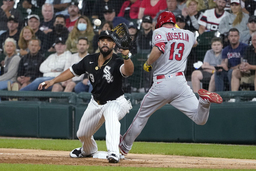 Los Angeles Angels' Phil Gosselin beats the throw to Jose Abreu for an RBI infield single during the third inning of a baseball game Wednesday, Sept. 15, 2021, in Chicago. Gosselin was originally called out, but the call was overturned after video review. (AP Photo/Charles Rex Arbogast) 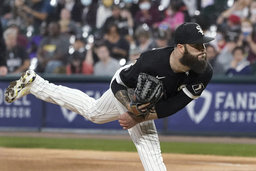 Chicago White Sox starting pitcher Dallas Keuchel follows through on a delivery during the first inning of the team's baseball game against the Los Angeles Angels on Wednesday, Sept. 15, 2021, in Chicago. (AP Photo/Charles Rex Arbogast)

CHICAGO (AP) Angels manager Joe Maddon has learned at least one thing about Brandon Marsh in the outfielder's first season in the majors.

Sure looks that way.

Marsh drove a 101 mph, full-count fastball from Kopech (4-3) over the wall in left-center for his second homer. He finished with three hits and scored two runs.

Mike Mayers (5-5) struck out the side in the seventh for the win. Steve Cishek worked out of a jam in the eighth before Raisel Iglesias finished for his 32nd save.

The White Sox put runners on the corners with one out in the ninth, but Brian Goodwin struck out swinging and Cesar Hernandez flied out to deep left.

The Angels played without Jo Adell after the young outfielder was placed on the 10-day injured list with a left abdominal strain, likely ending his season. Maddon also said he would be very surprised if star outfielder Mike Trout played again this year.

Trout injured his right calf running the bases May 17 and had a setback last month, but the three-time AL MVP has left open the possibility of returning in 2021.

Marsh, 23, said Trout has been helping him with his mental approach.

''He's been really aiding that part of my game, day in and day out, and I'm super appreciative,'' he said.

Yoan Moncada homered for AL Central-leading Chicago, which had won three of four.

The game was tied at 2 after each team pushed across a run in the sixth. Luis Rengifo hit a sacrifice fly against Dallas Keuchel, and Yasmani Grandal responded with an RBI single for the White Sox.

Keuchel issued a season-high five walks in six innings, but he worked his way out of trouble in his best performance in a month. The veteran left-hander went 0-3 with a 12.89 ERA in his previous four starts.

''Outside of a couple at-bats I feel like I really made the pitches I wanted to,'' Keuchel said.

Los Angeles used a replay reversal to jump in front in the third. With two outs and runners on second and third, Phil Gosselin reached on a grounder to third when Moncada hesitated before throwing to first.

Gosselin was originally called out, but the Angels challenged and he was awarded an infield hit.

Moncada atoned for the play with a leadoff drive to right in the fourth, tying it at 1 with his 12th homer.

Janson Junk pitched 4 1/3 innings of three-hit ball for the Angels in his second major league start. The rookie right-hander was acquired in a July 30 trade that sent left-hander Andrew Heaney to the New York Yankees.

Grandal has reached safely in a career-high 30 straight games for the third-longest streak in the majors this year. It's the longest single-season streak for the White Sox since Frank Thomas (35 games) and Albert Belle (33) in 1997.

Angels: Adell got hurt when he crashed into the wall in left while trying to catch Garrett Stubbs' RBI double in the ninth inning of the Angels' 4-2 win at Houston on Saturday night. INF Jose Rojas was recalled from Triple-A Salt Lake to replace Adell on the roster.

White Sox: Manager Tony La Russa said OF Adam Engel (left shoulder inflammation) could rejoin the team during its upcoming 11-game road trip. Engel has been playing for Triple-A Charlotte on a rehab assignment. ''I think it's maybe sooner rather than later on that trip,'' La Russa said. ... RHP Evan Marshall (right elbow) experienced some extra soreness after he pitched in back-to-back games during a rehab stint with Charlotte. Marshall got a shot in his elbow, and he said he is still hoping to return this year.

Reynaldo Lopez (3-2, 2.05 ERA) pitches for Chicago in the series finale Thursday afternoon. The right-hander committed a key throwing error in his last start, a 3-1 loss at Oakland last week. Alex Cobb (7-3, 3.82 ERA) comes off the IL to start for Los Angeles. He had been sidelined by right wrist inflammation.