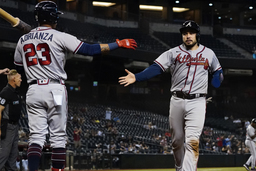 Atlanta Braves' Travis d'Arnaud greets Ehire Adrianza (23) as he scores on a base hit by Dansby Swanson during the ninth inning of a baseball game against the Arizona Diamondbacks, Tuesday, Sept. 21, 2021, in Phoenix. (AP Photo/Matt York) 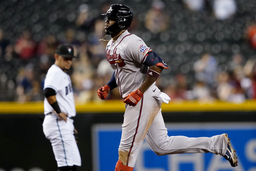 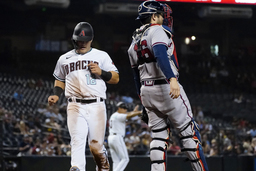 Arizona Diamondbacks' Daulton Varsho (12) scores on a ground out hit by Pavin Smith during the third inning of a baseball game as catcher Travis d'Arnaud looks on, Tuesday, Sept. 21, 2021, in Phoenix. (AP Photo/Matt York) 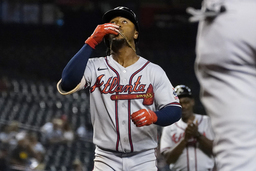 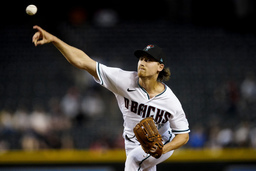 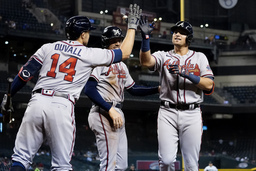 PHOENIX (AP) Austin Riley wasn't sure he belonged in the big leagues back in 2019. These days, he's one of the best in the business.

Riley launched his 30th homer of the season, Ozzie Albies added another two-run shot and the Atlanta Braves held their NL East lead by beating the Arizona Diamondbacks 6-1 on Tuesday night.

''That's pretty cool to say,'' Riley said of hitting the 30-homer mark. ''After last season and the way 2019 ended, you have your doubts and stuff. To put together - so far - a pretty good season, it's special.

Jorge Soler added a solo homer for the Braves, who won their third in a row and stayed three games ahead of second-place Philadelphia. The Phillies beat Baltimore 3-2 earlier in the day.

Riley hit his two-run shot in the first inning, a drive deep into the left-center field stands. The 24-year-old third baseman continues to evolve into a cornerstone for the Braves lineup, batting .300 with 94 RBIs. It's a big change from his first two big league seasons, when the prospect's inconsistency was an issue.

''You love that kid, where he's come from,'' Braves manager Brian Snitker said. ''He's hung in there and gave himself a chance.''

Albies hit a shot far into the right-field seats in the third. He's up to 29 homers this season and has 97 RBIs.

Soler's homer was his 24th season and 11th since coming to the Braves in a midseason deal with the Kansas City Royals. Snitker recently put Soler at the top of the lineup after a few slow games for the offense and the move has paid off with two straight wins over the Diamondbacks.

Even without star Ronald Acuna Jr., who is out for the year with a knee injury, Atlanta has flashed a powerful lineup. Six of their eight starters on Tuesday had at least 26 homers this season.

Jesse Chavez started for Atlanta in an opener role, pitching a scoreless 1 1/3 innings. Drew Smyly (10-4) followed, giving up one run over 3 1/3 innings while striking out four. Luke Jackson loaded the bases in the eighth but got out of the jam when Jake McCarthy flied out.

Weaver threw 102 pitches, including 78 strikes, but too many of them were over the middle of the plate. His defense didn't help much with three errors. The right-hander said he made a mistake when giving up his homer to Albies, but Riley put a good swing on a change-up that was inside off the plate.

The way Riley's swinging the bat, even those balls are leaving the yard.

The Diamondbacks had an all-too-common sloppy start when third baseman Josh VanMeter mishandled a grounder for an error on the first play of the game. Three batters later, Riley made them pay with the two-run homer.

''We got staggered early in the game,'' Arizona manager Torey Lovullo said. ''We don't make a play on defense and then they hit us with a two-run homer.''

The D-backs and Baltimore Orioles both have 103 losses this season, tied for the most in the big leagues.

Braves OF Adam Duvall was hitless in four plate appearances, striking out three times, bringing an end to his career-best 16-game hitting streak. Duvall is in the midst of a career year with 37 homers and 107 RBIs.

Diamondbacks rookie 1B Seth Beer will have surgery on his left (non-throwing) shoulder this week. He dislocated his left shoulder diving for a ball one week ago against the Dodgers.