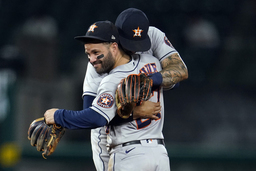 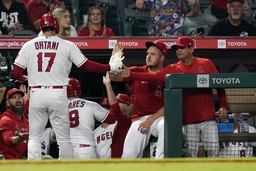 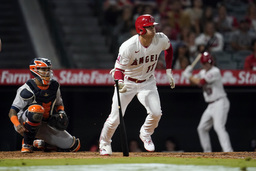 Los Angeles Angels' Shohei Ohtani follows through on a single during the sixth inning of a baseball game against the Houston Astros Tuesday, Sept. 21, 2021, in Anaheim, Calif. (AP Photo/Marcio Jose Sanchez) 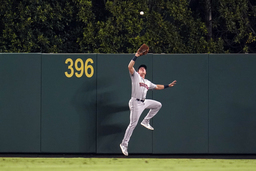 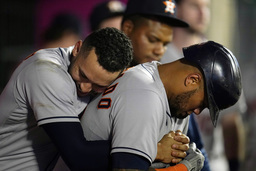 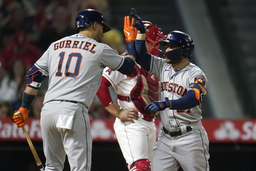 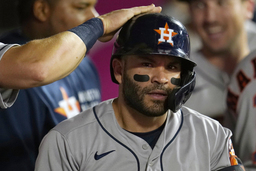 Houston Astros' Jose Altuve gets a pat on his helmet after hitting a two-run home run during the fifth inning of a baseball game against the Los Angeles Angels Tuesday, Sept. 21, 2021, in Anaheim, Calif. (AP Photo/Marcio Jose Sanchez)

Ohtani hit his 45th homer in the eighth inning, but Aledmys Diaz and Kyle Tucker hit back-to-back homers and drove in three runs apiece while leading the Astros to a 10-5 victory over the Los Angeles Angels on Tuesday night.

Ohtani connected for his first homer since Sept. 10, driving a solo shot off Houston's Cristian Javier 445 feet into the elevated right field stands at the Big A.

''Chop that up a little bit, you might get two or three out of that,'' Angels manager Joe Maddon said.

Ohtani has only three homers in September, but the two-way superstar is just one behind Toronto's Vladimir Guerrero Jr. and Kansas City's Salvador Perez for the major league lead.

With a 116.1 mph exit velocity that resembled his early-season feats, Ohtani also matched Mike Trout's 45 homers in 2019 for the second-most in Angels history. Troy Glaus hit 47 in 2000.

Ohtani declined to speak to reporters afterward, but Maddon weighed in on the AL MVP race, which some believe is tightening this month while Ohtani slumps and Guerrero contends for the Triple Crown: ''I think everybody (else) is in second, third, fourth and fifth place.''

Jose Altuve hit a two-run homer and Martin Maldonado added a solo shot in another blowout victory at the Big A for the Astros, who routed the Angels 10-0 on Monday. Houston built a 10-1 lead in the sixth inning of the rematch before coasting to its 12th win in 17 meetings with Los Angeles this season.

''We know this team is capable to do it every day,'' Diaz said. ''The guys are taking great at-bats now, top to bottom. We're playing good baseball right now, and hopefully we can keep it for the next month and a half.''

''That's pretty good, but we're just trying to win,'' said Altuve, whose 29th homer left him two shy of matching his career high. ''We're not quite paying attention to the magic number just yet. We have 11 more games, and we're trying to win them all and see what happens next.''

Jose Urquidy (8-3) pitched six-hit ball into the sixth inning, yielding four runs while staying unbeaten since June. In his fourth appearance back from a two-month absence with a right shoulder injury, Urquidy lasted almost as long as manager Dusty Baker had hoped.

''We were trying to get him through the sixth and build up his endurance, and then he hung a couple of breaking balls and gave up three runs,'' Baker said. ''And that's why we had to go get him. He was very good up to that point.''

Phil Gosselin hit a three-run homer and Jack Mayfield had a solo shot for the Angels, who have lost five straight while wrapping up their seventh straight non-playoff season. The Halos had their second consecutive embarrassing pitching performance against the division leaders, giving up up 18 runs in an eight-inning stretch spanning the first two games of this four-game series.

Houston got four hits and four runs off Angels starter Packy Naughton (0-3), who pitched into the fifth inning of his fourth career start.

Tucker hit a two-run homer and Diaz followed with a solo shot off Naughton in the second for the Astros' 10th back-to-back homers of the season.

''I made two bad pitches,'' Naughton said. ''I think I battled and came back pretty well, but you've got to hope next time you can come back and execute those pitches.''

Los Angeles has chosen to promote several pitchers with minimal major league experience to finish out what's likely to be its sixth straight losing season, and the first four hurlers who took the mound Tuesday were rookies who came in with a combined 48 1/3 innings in the big leagues. Austin Warren was the only one who performed well, throwing a perfect eighth in his return from a four-week stint on the COVID-19 injured list.

Astros: 3B Alex Bregman got the day off for rest.