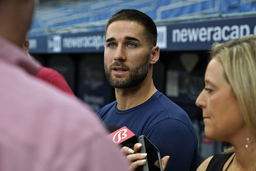 Tampa Bay Rays' Kevin Kiermaier talks to reporters before a baseball game against the Toronto Blue Jays Wednesday, Sept. 22, 2021, in St. Petersburg, Fla. Kiermaier was answering questions about picking up the Blue Jays pitch data card after being tagged out at home plate by catcher Alejandro Kirk during Monday's game. (AP Photo/Chris O'Meara) 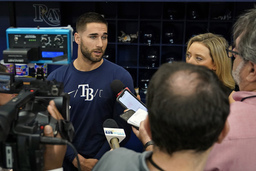 Tampa Bay Rays' Kevin Kiermaier, left, talks to reporters before a baseball game against the Toronto Blue Jays Wednesday, Sept. 22, 2021, in St. Petersburg, Fla. Kiermaier was answering questions about him picking up the Blue Jays pitch data card after being tagged out at home plate by catcher Alejandro Kirk during Monday's game. (AP Photo/Chris O'Meara)

ST. PETERSBURG, Fla. (AP) Tampa Bay Rays center fielder Kevin Kiermaier is ''shocked to see what has transpired'' and finds reaction ''just hard to believe'' to his scooping up a scouting a card that fell out of Toronto catcher Alejandro Kirk's wristband.

Kiermaier reiterated before Wednesday's series finale that he had no bad intentions. The speedster was called out sliding into home during the sixth inning of the Rays' 6-4 win Monday night and saw a strip of paper lying next to him after the play. He casually picked it up and took it back to Tampa Bay's dugout, where he discreetly handed it to Paul Hoover, the club's field coordinator.

Kiermaier thought the card was his scouting report.

''We're making this way too complex,'' Kiermaier said. ''I saw a few words on it, just knowing it wasn't mine I didn't look at it, still haven't looked at it. Don't even know what the heck is on it.''

''A couple seconds after I realized it wasn't ours and at that point, I'm not giving it back,'' Kiermaier added. ''I'm not going to walk to the other dugout or find another way. They can think whatever they want over there, they're entitled to an opinion, I'm over it, though.''

Kiermaier pointed out his scouting card came out while sliding into second base during a recent game against Detroit and Tigers infielder Niko Goodrum tried grabbing it, Kiermaier jokingly put his foot on it and said ''you can't have it.''

When asked if he did anything wrong, Kiermaier replied: ''No.''

''It's easy to sit here after the fact knowing it's their card, I understand,'' Kiermaier said. ''At that moment I just ran 360 feet-plus (trying to score on an infield hit and throwing error) and I'm sitting there trying to process the play, thinking my scouting report is on the ground, grabbing it, just walking back trying to go out there on defense and catch my breath thinking it's done and over with.''

There were no incidents in Tuesday's game stemming from the situation.