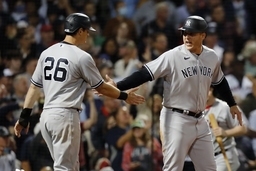 New York Yankees' DJ LeMahieu (26) and Anthony Rizzo celebrate after scoring on a double by Aaron Judge during the eighth inning of a baseball game against the Boston Red Sox, Sunday, Sept. 26, 2021, in Boston. (AP Photo/Michael Dwyer) 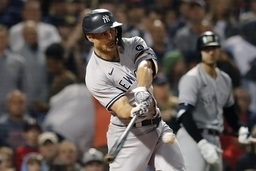 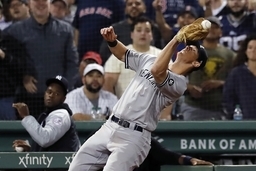 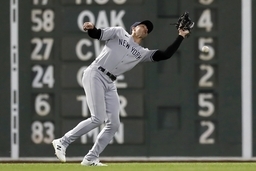 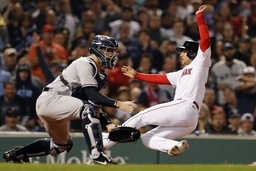 Boston Red Sox's Jose Iglesias, right, scores ahead of the throw to New York Yankees' Gary Sanchez on a sacrifice fly by Christian Arroyo during the seventh inning of a baseball game, Sunday, Sept. 26, 2021, in Boston. (AP Photo/Michael Dwyer) 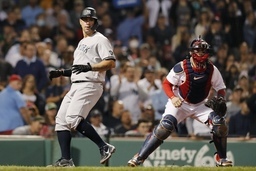 Then Boston fumbled a pair of foul balls with Aaron Judge at the plate, twice giving the slugger new life before his two-run double propelled New York to a 6-3 victory on Sunday night and a series sweep that flipped the lead in the AL wild-card race.

''It's a little bit stunning, right? You can't make that stuff up,'' Boone said. ''It's not something you're going to see very often, two popups get dropped by really good defenders. It's part of the ride right now.''

After Judge turned a 3-2 deficit into a 4-3 lead, Giancarlo Stanton hit a two-run homer over the Green Monster and out of the ballpark to seal the Yankees' sixth straight win. Stanton, who won Saturday's game with an eighth-inning grand slam, homered in all three games and drove in 10 runs during the series.

''It's a big time right now, so I've just got to make sure I'm the most prepared,'' Stanton said. ''You can't be scared of those moments, or they'll sneak up on you real quick.''

The Yankees, who arrived in Boston trailing the Red Sox by two games, leave it with a one-game lead in the race to host the Oct. 5 AL wild-card game. Boston remains in playoff position, one game ahead of Toronto for the second wild-card spot.

''It's not what we wanted coming into the series,'' Red Sox manager Alex Cora said. ''We didn't get the job done. It's that simple.''

After Boston took a 3-2 lead in the seventh on a pair of dropped popups, New York put runners on second and third with one out before Judge hit a foul ball that rookie first baseman Bobby Dalbec short-armed as he approached the Red Sox dugout.

The Red Sox had a second chance to retire Judge when he tipped a 1-2 pitch, but catcher Christian Vazquez couldn't control it. (Vazquez said he lost the ball on the transition into his other hand.)

He then lined the ball to left-center to make it 4-3.

''You can't give that man too many extra chances,'' Stanton said. ''It was just a tremendous at-bat for him to keep pushing, keep fouling pitches off and waiting to get one he could drive into the gap.''

Boone said Judge dislocated his pinky sliding head-first into second base. They were able to pop it back into place and finished the game, the manager said.

Chad Green (10-7) earned the win despite blowing a 2-1 lead in the seventh when DJ LeMahieu and Joey Gallo dropped easy popups, allowing the go-ahead run to score. In all, Green allowed two hits in 1 2/3 innings, striking out two.

Aroldis Chapman pitched the ninth to earn his 30th save.

Garrett Richards (7-8) pitched a perfect seventh but walked two and gave up Anthony Rizzo's double in the eighth before Adam Ottavino relieved him and allowed Judge's two-run double.

New York led 2-1 when Jose Iglesias singled to lead off the seventh and took second on Alex Verdugo's bunt single. Joely Rodriguez's wild pitch moved the runners up, and Vazquez hit a sacrifice fly to tie it.

Green struck out Kike Hernandez, but when pinch-hitter Kyle Schwarber popped up the first pitch he saw in front of the Yankees dugout, LeMahieu flubbed it. Another seemingly easy popup clanged off Gallo's glove in left-center, allowing the run to score.

NO SMOKE, NO FIRE

The game was delayed four minutes with two outs in the top of the fourth inning when the fire alarm went off in Fenway Park. The umpires called time, but the teams remained on the field. The Red Sox said the alarm was caused by a faulty sprinkler head.

When the game resumed, Saturday game-winner Stanton buzzed Eduardo Rodriguez's head with a line drive that ricocheted off second base into center for a single.

Red Sox: Placed LHP Josh Taylor on the injured list (retroactive to Sept. 23) with a low back strain. RHP Eduard Bazardo was recalled from Triple-A Worcester to take his spot on the roster.

Yankees: After an off-day, begin a three-game series in Toronto with RHP Jameson Taillon (8-6, 4.41 ERA) facing the Blue Jays.

Red Sox: Have Monday off before beginning their season-ending road trip with LHP Chris Sale (5-0, 2.57 ERA) facing the Orioles.