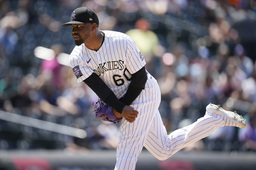 CINCINNATI (AP) The Cincinnati Reds added more help for their struggling bullpen by acquiring right-hander Mychal Givens from the Colorado Rockies on Wednesday in exchange for two pitching prospects.

On Tuesday night, the Reds acquired relievers Luis Cessa and Justin Wilson from the New York Yankees for a player to be named.

The 19-year-old Williams heads back to the team that picked him in the fourth round of the 2020 draft. He was traded to the Reds last November in the deal that also brought right-hander Jeff Hoffman to Cincinnati.

Williams has pitched for the low-A Daytona Tortugas this season, posting a 5.55 ERA. The 24-year-old Davis is 3-6 with a 3.60 ERA in 13 starts with the high-A Dayton Dragons.