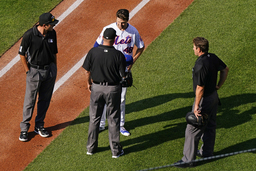 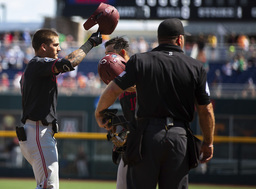 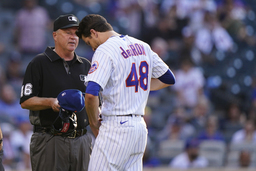 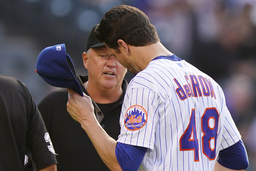 ARLINGTON, Texas (AP) The search is on by major league umpires for sticky stuff that pitchers might use to doctor baseballs.

What has long been against the rules but rarely enforced is being overlooked no more. The crackdown began Monday when major and minor league umpires started regular checks of all pitchers for tacky substances used to get a better grip on the balls, but can also increase the spin of the balls and make hitting them more difficult.

''I think I've seen everything in baseball, but this is new, setting a new precedent,'' said Houston Astros manager Dusty Baker, in his 24th season as a big league manager after 19 seasons as a player.

Asked whether such substances were tacitly allowed in the past, Baker responded, ''You just didn't really make a fuss about it, but it was against the rules, so we'll see.''

Any pitcher caught using banned foreign substances would be ejected and then suspended for 10 games.

Jacob deGrom was the first pitcher inspected under the new directive in the opener of the New York Mets' doubleheader against Atlanta. The two-time National League Cy Young Award winner passed.

The Mets and Braves were among 14 Major League Baseball teams scheduled to play Monday, six days after a five-page memo to teams about the pending change in enforcement that followed what baseball Commissioner Rob Manfred called an extensive process of repeated warnings without effect.

Fans at Citi Field booed loudly when plate umpire Ben May halted deGrom on the pitcher's path off the field after the right-hander retired the side in order with two strikeouts in the first inning.

Crew chief Ron Kulpa jogged in from third base and asked deGrom for his glove and hat, and deGrom chuckled as he handed them over. Kulpa looked them over and handed them back, then asked deGrom to undo his belt buckle and checked for goop there, too.

Cleared by Kulpa, deGrom walked on to the dugout, laughing with catcher Tomas Nido about the exchange as the fans cheered.

Braves starter Kyle Muller, who was making his first big league start, was similarly stopped and inspected after the bottom of the first.

DeGrom appeared to ask May after the top of the second inning if he'd need to be inspected again, but May waved him on that time. But he was inspected again after the fifth inning, prompting more boos from the fans while their hometown pitcher was cleared again.

Manfred said last week that the enforcement of foreign substances was needed ''to level the playing field'' after two months of comprehensive data collection, including inspections of balls used in games and testing by third-party inspectors. That came with the league batting average at a more than a half-century low along with record strikeouts.

Any suspended players would not be replaced on a team's active roster. Braves manager Brian Snitker emphasized that when he met with his players Sunday and discussed crackdown at length.

''I think the biggest thing we wanted to reiterate is if you get popped, we can't replace you,'' he said Monday from Baltimore. ''That's a big deal. I think everybody's aware of what's going to go on and how serious it is, to not mess around and get suspended, because that's a definite blow to your club when you got to go short like that.''

Asked whether sticky stuff was a problem before: ''You could tell guys were using something. ... I could hear the balls coming off guys' fingers,'' Snitker said.

Baltimore Orioles manager Brandon Hyde said the league had been very clear and thorough about the changes and the reasons for them, and issued another memo Sunday night before they took effect to provide more clarity.

''I think it's pretty well reported that guys for a lot of years have used things, whether it's sunscreen or pine tar, to get a little bit better grip to command the ball for numerous reasons, whether just feel in their fingertips, etc. Obviously now we're to a different point where guys were using stuff that was a little bit more aggressive than that,'' Hyde said. ''The league came down and said, `Listen, we're not going to put up with any of it.' And we're just going to follow it and see how it goes.''