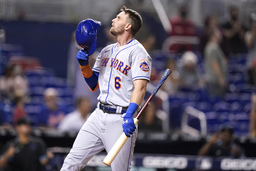 New York Mets' Jeff McNeil (6) reacts after he lined out to third base for the final out of the ninth inning of a baseball game against the Miami Marlins, Monday, Aug. 2, 2021, in Miami. (AP Photo/Lynne Sladky) 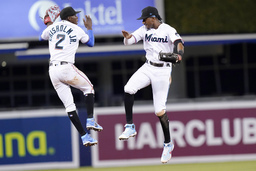 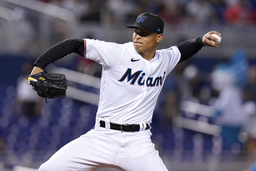 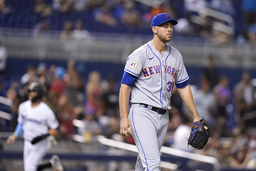 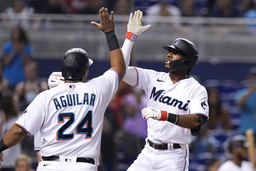 Lewis Brinson connected for a first-inning grand slam to back Jesus Luzardo in his Miami debut, and the last-place Marlins beat the NL East-leading New York Mets 6-3 Monday night.

Miguel Rojas had two hits and scored twice for the Marlins, who ended a four-game losing streak after dropping all three games at home to the New York Yankees over the weekend.

''All the credit goes to those guys out there,'' Miami acting manager James Rowson said. ''They played a great series against the Yankees, came up short in those games but didn't let it get them down. We came right back first game of this series and got a big win.''

Brinson drove a fastball from Tylor Megill into the Mets bullpen in right-center for his fourth homer of the season, and the 4-0 lead matched Miami's run total from the entire series against the Yankees.

''I was looking for a heater,'' Brinson said of his opposite-field shot. ''I didn't really want to miss that fastball. I never hit a home run to that field so that felt good.''

Luzardo (3-4), acquired from the Oakland A's for Starling Marte before the trading deadline, allowed three runs on four hits in five innings. The left-hander struck out five, walked three and hit a batter.

Down 5-3, New York loaded the bases with two outs in the eighth before Miami reliever Dylan Floro came on and got Brandon Drury on a fielder's choice.

Floro finished with a scoreless ninth after Michael Conforto's leadoff pinch-hit double for his third save in six chances.

Javier Baez limped to the dugout after trying to beat out a grounder to first in the third. Acquired by the Mets from the Chicago Cubs before the deadline, the two-time All-Star nearly collided with Luzardo as both raced to the bag. Baez remained in the game.

''He hyper-extended his leg but told us immediately he was good,'' Mets manager Luis Rojas said.

Pete Alonso hit his 24th homer, a solo blast in the third, for the Mets, who are 8-10 since the All-Star break.

''Yes, we're in first place but every team goes through their ups and down during the year,'' Alonso said. ''I think for us right now, it's just a little rut. I don't think it's any long-term concern.''

Brinson had another RBI in the eighth when Miguel Rojas scored on Baez's throwing error.

''The second inning kind of sped up on me,'' Luzardo said. ''I calmed down, got my groove in the fourth and the fifth and I felt pretty good. I'm just trying to tap into that.''

For Luzardo, Monday's start was special because he grew up in neighboring Broward County. In addition to his parents, Luzardo left tickets for seven guests but said he received texts from 100 friends who attended his Marlins debut.

ANOTHER NIGHT OFF FOR CONFORTO

After his batting average slid under .200, Conforto was given another break from the starting lineup Monday. Conforto, who snapped an 0-for-13 funk with his ninth-inning double, has come off the bench two of the last three days.

''Michael could be back in tomorrow's lineup,'' Rojas said of his right fielder. ''The homework for him is to simplify things and go out there, look for a pitch and crush it.''

The Mets acquired RHP Jake Reed off waivers from the Tampa Bay Rays and placed him on the taxi squad. OF Albert Almora was recalled from Triple-A Syracuse. ... The Marlins optioned OF Brian Miller to Triple-A Jacksonville to make room for Luzardo.

Mets: RHP Miguel Castro (health and safety protocols) was placed on the injured list. Rojas said he took a COVID-19 test, and the club didn't have the results yet. ''He woke up with symptoms and did the right thing, let the trainer know and everyone else did the right thing, following the protocol,'' Rojas said. ... CF Brandon Nimmo was a late scratch with a hamstring injury.

Marlins: RHP Elieser Hernandez (right quad strain) will have his second rehab assignment Thursday at Jacksonville. Hernandez will be limited to 60 pitches.

Mets RHP Taijuan Walker (7-5, 3.71 ERA) will start the second game Tuesday. The Marlins have not announced a starter.