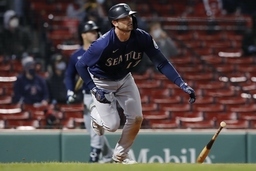 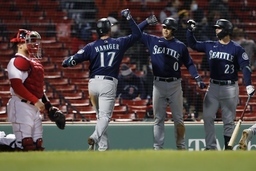 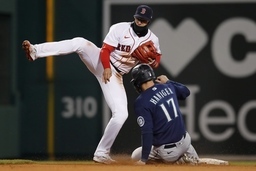 Seattle Mariners' Mitch Haniger (17) is out at second base as Boston Red Sox's Enrique Hernandez turns the double play on Ty France at first during the eighth inning of a baseball game Thursday, April 22, 2021, in Boston. (AP Photo/Michael Dwyer) 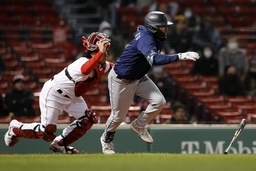 BOSTON (AP) Mitch Haniger hit a three-run homer in the 10th inning moments after Sam Haggerty's go-ahead double, and the Seattle Mariners rallied past the Boston Red Sox 7-3 Thursday night despite getting just three hits on a cold, blustery night.

Seattle is the first team to score seven or more runs on three or fewer hits since the 1994 Oakland Athletics scored eight runs on a pair of hits against Toronto, according to ESPN.

Haggerty made it 4-3 with his double off Darwinzon Hernandez (0-1), Seattle's first hit since Ty France's tying, two-run double against Nick Pivetta with two outs in the fifth that snapped the right-hander's no-hit bid.

Haniger, who walked twice, came up later in the 10th and belted a shot out to right-center for his fifth homer of the season.

The Mariners improved to 5-0 in games when Haniger homers. He said Hernandez had already gotten two fastballs by him before he connected in the 10th.

''I saw two of them already. I felt like if he brought it in the zone again, I'd be able to put a good swing on it,'' Haniger said.

Haggerty doubled in his only at-bat after entering the game as a pinch-runner in the eighth, tying it at 3 when he scored on a throwing error one inning after Boston had reclaimed a one-run lead.

Rafael Devers homered for the Red Sox, who were cruising behind Pivetta but couldn't hold leads of 2-0 and 3-2.

Kike Hernandez led off the seventh with a triple against Seattle reliever Casey Sadler, who bounced an 0-2 curveball for a wild pitch that got past catcher Luis Torrens and allowed Alex Verdugo to score the go-ahead run.

Seattle tied it again the eighth with help from a throwing error by reliever Adam Ottavino, who fielded J.P. Crawford's sacrifice bunt cleanly but made a wild throw to third that allowed Haggerty to come all the way around from second.

Devers gave Boston the first lead of the game with a solo homer to right to start the second, clearing the Red Sox bullpen by several rows for his sixth of the season.

Devers led off the fourth with a single, stole second and scored on a single to right by Hunter Renfroe to put Boston up 2-0

Pivetta allowed just one baserunner before struggling in the sixth, walking two with two outs. France scored them both with his double but was thrown out trying for third.

Justin Dunn, who pitched across town for Boston College from 2014-16, allowed two runs and six hits in five innings for the Mariners. He struck out five and walked one.

The game-time temperature was 46 degrees and quickly dipped into the 30s with strong winds gusting throughout the night.

''It was freezing. It was really windy and that was the tough part,'' Haniger said.

The Mariners made up for their lack of hits by drawing seven walks, which Boston manager Alex Cora said caught up with the Red Sox.

''If you walk seven guys, you're putting yourself in a bad position,'' Cora said. ''It's not about getting hits. It's about getting on base. That's the name of the game and we walked seven guys.''

Mariners: France started as DH for the first time since taking a pitch off his right forearm Monday against the Dodgers. Manager Scott Servais said France, who struck out as a pinch-hitter Tuesday, was feeling better and would likely get some defensive time in the next few games as the Mariners try to rotate DH duties during the eight-game road trip that kicked off Thursday.