White Sox get closer Kimbrel from Cubs for Madrigal, Heuer 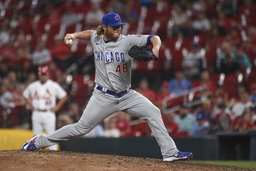 CHICAGO (AP) The Chicago White Sox acquired closer Craig Kimbrel from the crosstown Cubs on Friday, a move that should give the AL Central leaders a fearsome bullpen for their playoff push.

The White Sox already had one of baseball's best closers in All-Star Liam Hendriks. Now the South Siders add Kimbrel, who has a 0.49 ERA and 23 saves in 25 opportunities for the Cubs this season and leads NL relievers in strikeout rate and opponents' batting average. Kimbrel ranks ninth in history with 371 saves in his 12 years in the majors.

The White Sox paid quite a price to get him: They sent second baseman Nick Madrigal, a budding star who is out for the season with a torn right hamstring, to the Cubs along with right-handed reliever Codi Heuer.

''We viewed Craig as the premier relief pitcher available at this trade deadline, and so we knew the cost would be steep in terms of parting with young talent,'' White sox general manager Rick Hahn said in a statement. ''But we recognize the special opportunity that currently exists and our team, our clubhouse and our fans deserve to know we will do everything we can to reach the postseason and win meaningful games in October.''

The White Sox entered Friday with an eight-game lead over division rival Cleveland. The Cubs are fourth in the NL Central and entering a rebuild.

The White Sox had already addressed the loss of Madrigal by acquiring slugging second baseman Cesar Hernandez from the Cleveland Indians on Thursday.