Padres' Machado screams at Tatis in dugout after ump dispute 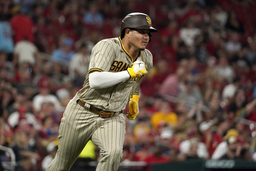 San Diego Padres' Manny Machado rounds first on his way to a double during the sixth inning of a baseball game against the St. Louis Cardinals Friday, Sept. 17, 2021, in St. Louis. (AP Photo/Jeff Roberson) 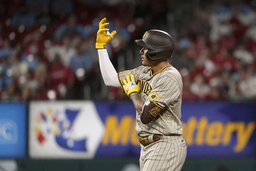 Machado shouted and cursed at Tatis, telling him ''it's not about you'' and ''you go play baseball'' after Tatis struck out looking in the fifth. Tatis reacted angrily to the call by plate umpire Phil Cuzzi, and manager Jayce Tingler was ejected when he came out of the dugout to argue.

The 29-year-old Machado and 22-year-old Tatis were separated by teammates during the incident, which came at the end of the top of the fifth. They eventually made their way to their positions - Machado at third, Tatis at short.

San Diego blew a two-run lead in the eighth inning and lost 3-2 to drop 2 1/2 games behind the Cardinals for the second and final NL wild card.