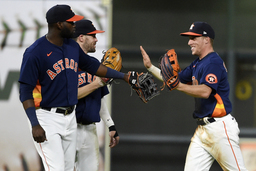 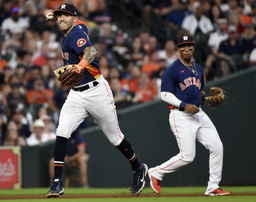 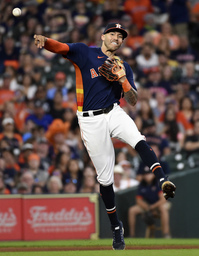 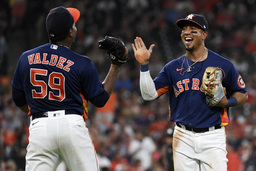 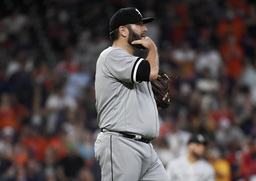 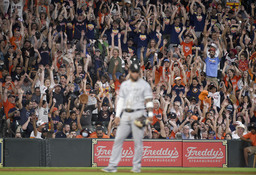 Fans do the wave during the third inning of a baseball game between the Houston Astros and the Chicago White Sox, Saturday, June 19, 2021, in Houston. (AP Photo/Eric Christian Smith) 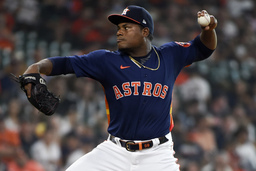 HOUSTON (AP) In the three games since Houston star third baseman Alex Bregman was injured, the two players filling in for him have come up big to help the Astros keep their winning streak alive.

Framber Valdez (4-0) had another strong start to help the Astros to a sixth consecutive victory, tying their longest winning streak this season.

Garcia played third base on Saturday after Abraham Toro had for three hits and four RBIs at the position in the first two games without Bregman, the runner-up for AL MVP in 2019.

''It's huge and you really feel part of the team when you get to play and then you have success especially to help us win,'' manager Dusty Baker said. ''We're going to have to depend on them because we don't have Bregman.''

The Astros tagged Lynn (7-3), who entered with a 1.51 ERA, for eight hits and six runs - both season highs - in four innings in his shortest start of the season. Five of the runs were earned, which was also the most he'd permitted this season.

''When they get runs on base, they do a really good job of getting on top of every pitch,'' Lynn said. ''They're doing everything they can to make those scoring opportunities as good as they can be, so you've got to be better.''

Things went wrong for the White Sox almost immediately. Jose Altuve singled and advanced to second on an error by third baseman Yoan Moncada when he badly overthrew first base to start Houston's first. A single by Yuli Gurriel with one out sent Altuve to third, and he scored on a wild pitch to make it 1-0.

There were two outs in the third when Adam Engel singled to right field. He scored when Moncada smacked a double to left field to tie it at 1-1.

Altuve got things going in the third on a double with one out. Brantley followed with an RBI single to put Houston on top 2-1.

There were two outs in the inning when Yordan Alvarez singled before Lynn walked Correa to load the bases.

Garcia sent a fastball from Lynn on a full count to the warning track in right field to clear the bases and extend the lead to 5-1.

Garcia is working hard to take advantage of his opportunity.

''We have some really good players and we've been able to pick up the slack and still play well,'' he said.

Houston added a run in the fourth inning on an RBI double by Brantley with two outs.

Andrew Vaughn hit a solo homer to start the seventh and get the White Sox within 6-2. Danny Mendick singled with one out in the inning and scored from second with two outs after a wild pitch by Valdez and an error by catcher Martin Maldonado.

Correa hit a solo homer in the eighth.

White Sox: Vaughn was back in the lineup a night after leaving when a ball bounced and hit him in the face as he was sliding into second base. Manager Tony La Russa said Vaughn was better on Saturday but that he'd likely end up with a black eye from the hit. ... RHP Jose Ruiz was going to be evaluated after leaving in the eighth inning with soreness in one of his knees.

Astros: Bregman, who was placed on the injured list with a strained left quadriceps on Thursday, said he was feeling better Saturday but that he isn't sure how long he'll be out. ... OF Kyle Tucker, who is on the injured list due to health and safety protocols, has been cleared to return to the team, but manager Dusty Baker said he probably won't be activated until Monday.

La Russa on the series: ''They're not playing any harder than we are, they're just playing better. I like the way we hung in there. We're capable of turning it around.''

Chicago's Dallas Keuchel (6-1, 3.78) will make his first career start against the Astros, where he played from 2012-2018, winning the AL Cy Young award in 2015. Keuchel will oppose Lance McCullers (3-1, 2.89), one of his closest friends from his time in Houston, as the Astros look to complete the four-game sweep.