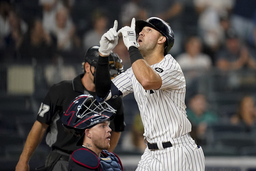 Gallo was pulled after the Yankees batted in the third inning and was replaced by Tyler Wade. In his only at-bat, he fouled out to third base in the second.

On Friday, Gallo homered twice in an 8-0 win for his sixth multi-homer game this year, tied with Kansas City catcher Salvador Perez for the most in the majors. He entered Saturday with six homers in his last six games with at least one at-bat.

The Yankees began the day a half-game ahead of Toronto for the second AL wild card, a half-game behind Boston.