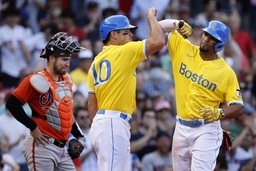 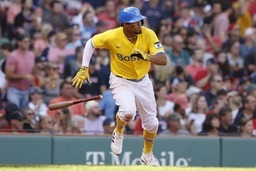 Boston Red Sox's Xander Bogaerts runs up the baseline on his RBI single during the fifth inning of a baseball game against the Baltimore Orioles, Saturday, Sept. 18, 2021, in Boston. (AP Photo/Michael Dwyer) 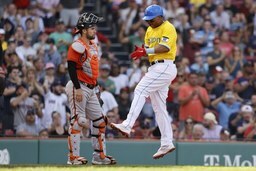 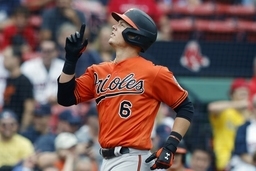 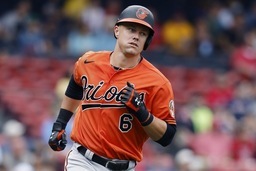 Baltimore Orioles' Ryan Mountcastle runs the bases after hitting a two-run home run during the first inning of a baseball game against the Boston Red Sox, Saturday, Sept. 18, 2021, in Boston. (AP Photo/Michael Dwyer) 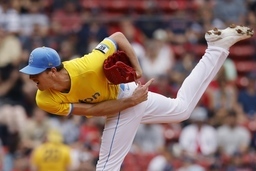 The Red Sox are one game ahead of Toronto and 1 1/2 games in front of the rival Yankees in the playoff chase.

''It's fun being able to go out there to help your team,'' Bogaerts said. ''We know every game is huge now.''

Bobby Dalbec added a two-run double, and Hunter Renfroe and Rafael Devers each drove in a run for Boston. Bogaerts and Devers both had three hits.

Ryan Mountcastle hit his 30th homer, a two-run shot, and Austin Wynns added a solo drive for the Orioles, who lost for the 11th time in the last 12 meetings against the Red Sox after sweeping a season-opening three-game series between the teams.

Bogaerts' three-run shot hit off a billboard atop the Green Monster against reliever Mike Baumann (1-1) after Renfroe had an RBI double and Devers singled during a game-breaking, four-run sixth.

Bogaerts also had a go-ahead, RBI single in the fifth, making it 4-3.

''Having that today was a different experience,'' said Houck, who was a starting pitcher in 12 of his previous 14 appearances this season. ''It's about going out there and putting the team in a good a spot to win.''

Trailing 2-0, the Red Sox scored three times in the bottom of the first on Devers' RBI single and Dalbec's two-out double.

The Orioles had a 2-0 lead after just two pitches against starter Nick Pivetta when Cedric Mullins doubled off the left-field wall and Mountcastle followed with hit his shot into the Monster seats.

''When you have a season like this, you're looking for bright spots to build on,'' Orioles manager Brandon Hyde said of his team's major league-high 101st loss.

Mountcastle's drive came a day after he surpassed Cal Ripken Jr.'s record (28) for most homers by an Orioles rookie.

Wynns' shot left Fenway Park completely over the Monster in the second.

Pivetta gave up three runs on seven hits, striking out one and walking three.

Red Sox manager Alex Cora maneuvered his pitchers like a playoff game, pulling Pivetta after 2 2/3 innings with two runners on. He lifted left-handed reliever Darwinzon Hernandez with two on and one out in the fifth for a right-handed pitcher vs. right-handed hitter matchup, bringing in Houck.

Baltimore starter Zac Lowther gave up three runs - all in the first inning - over 3 1/3 innings. In his previous start Monday against Toronto, the lefty lasted just two innings, allowing seven runs in a 22-7 loss to the Blue Jays.

Baltimore's Richie Martin had the bat slip out of his hands and go flying into the stands behind the home plate. No one appeared to be injured.

Orioles: Hyde said INF Trey Mancini, C Pedro Severino and INF Ramon Urias, who were all out of the lineup, would see spot duty the rest of the season due to nagging injuries.

Red Sox: INF Christian Arroyo (on the COVID-19 related injured list since Aug. 27) is on a rehab assignment with Triple-A Worcester and could be activated soon.

LHP Alexander Wells (1-3, 7.76 ERA) is set to go for the Orioles in the series finale on Sunday afternoon against Red Sox RHP Nathan Eovaldi (10-8, 3.52). It would be Boston's fifth consecutive game against a lefty starter.