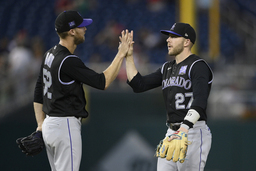 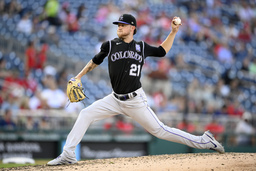 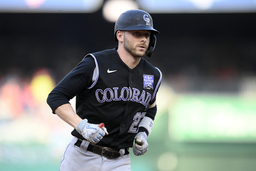 Colorado Rockies' Trevor Story rounds the bases on his three-run home run during the fourth inning of a baseball game against the Washington Nationals, Saturday, Sept. 18, 2021, in Washington. (AP Photo/Nick Wass) 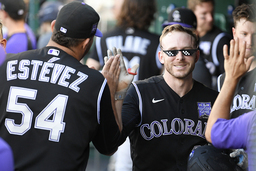 Colorado Rockies' Trevor Story, front right, celebrates his three-run home run with Carlos Estevez (54) and others in the dugout during the fourth inning of a baseball game against the Washington Nationals, Saturday, Sept. 18, 2021, in Washington. (AP Photo/Nick Wass) 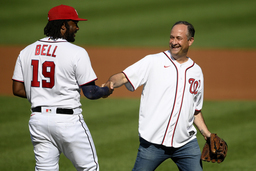 Doug Emhoff, second gentleman of the United States, right, shakes hands with Washington Nationals first baseman Josh Bell (19) after he threw out the ceremonial first pitch before a baseball game between the Nationals and the Colorado Rockies, Saturday, Sept. 18, 2021, in Washington. (AP Photo/Nick Wass)

Brendan Rodgers had three hits, including his 14th homer three pitches into the game for a 2-0 Colorado lead. Twelve of Rodgers' 14 homers this season have come away from hitter-friendly Coors Field.

''He's popping right now and he's due to pop off continuously,'' Freeland said of Rodgers. ''He's got it all and I think he's starting to realize that now.''

Story hit a high fly that sneaked over the wall in right field in the fourth to put the Rockies in front 6-0. Story has 23 homers with 14 games left after reaching 24 in each of his previous four full seasons.

''All in all, I thought a number of guys had good at-bats (Saturday),'' Colorado manager Bud Black said. ''There was some good things offensively. Really good.''

Freeland (6-8) gave up seven hits and a walk but lowered his ERA to 4.50. Juan Soto doubled for Washington's only extra-base hit against Freeland, who had allowed eight home runs in his previous five starts.

''Obviously, you kind of think back and wish we played like this earlier,'' Story said. ''(But) I don't think we're going to live too much in the past there.''

''He just had no command of his pitches,'' Nationals manager Dave Martinez said. ''His fastball was erratic. He fell behind.''

The Nationals are 12th in ERA in the 15-team National League. The loss dropped last-place Washington to 60-88.

Second Gentleman Douglas Emhoff threw out the ceremonial first pitch to Nationals first baseman Josh Bell on Saturday hours after Vice President Kamala Harris performed the coin flip before a football game between her alma mater Howard and visiting Hampton University at Audi Field, home to DC United of the MLS, and just a block from Nationals Park.