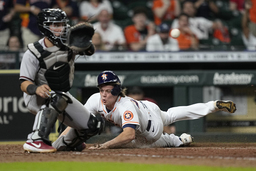 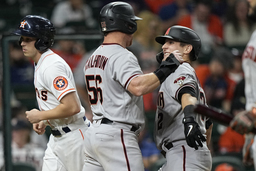 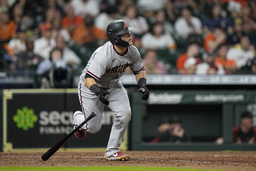 Arizona Diamondbacks' Daulton Varsho drops his bat after hitting a two-run home run against the Houston Astros during the 10th inning of a baseball game Saturday, Sept. 18, 2021, in Houston. (AP Photo/David J. Phillip) 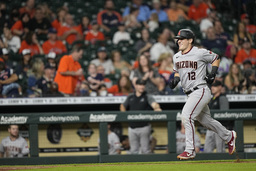 Arizona Diamondbacks' Daulton Varsho (12) runs down the third base line after hitting a two-run home run against the Houston Astros during the 10th inning of a baseball game Saturday, Sept. 18, 2021, in Houston. (AP Photo/David J. Phillip) 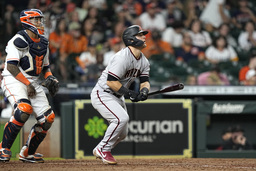 HOUSTON (AP) Kole Calhoun knocked in the go-ahead run with an RBI single and Daulton Varsho homered as the Arizona Diamondbacks scored three runs in the 10th inning for a 6-4 win over the Houston Astros on Saturday night.

Calhoun hit a run-scoring single off Yimi Garcia (3-9) through the right side of the drawn-in infield to give Arizona the lead in the 10th. Varsho followed with a two-run homer to center, extending the lead to 6-3.

''I tried to battle that at-bat,'' Varsho said. ''I had an opportunity to swing 3-0 and missed my pitch a little bit there, but I got another chance, put the bat on the ball and sent the ball out of the ballpark.''

Garcia said through a translator that his command wasn't great on all his pitches.

''Calhoun's just squeaked through the infield,'' Houston manager Dusty Baker said. ''That was the tone all night. It was the same way they did with Lance (McCullers). On the home run, he just found too much of the plate. It was as simple as that.''

Tyler Clippard allowed an RBI single by Jason Castro to lead off the 10th, but induced a fielder's choice groundout by Jose Altuve before walking Alex Bregman. After Yordan Alvarez grounded out, putting runners on second and third, Clippard got a flyout from Yuli Gurriel to end it and earn his sixth save.

J.B. Wendelken (3-2) pitched a perfect ninth for the win as Arizona snapped a four-game skid.

''They did a fantastic job,'' Arizona manager Torey Lovullo said. ''When this team puts things together like that. You get some solid starting pitching, timely hitting, the bullpen takes over, you pick up the baseball and do your job, this is how good of a game we can play.

''They made the statement today by getting some big out, very crucial outs and important parts of their lineup matched up well, and we won the baseball game.''

Arizona got to Houston starter Lance McCullers, Jr. for three runs in the fourth.

After David Peralta scored on a fielding error by Gurriel, Christian Walker hit an RBI double, and Pavin Smith followed with an RBI single, giving the Diamondbacks a 3-2 lead.

Alvarez hit a two-run homer to center to give the Astros a 2-0 lead in the first. Carlos Correa hit a sacrifice fly to tie it at 3-all in the sixth.

Astros: RHP Peter Solomon was recalled from Triple-A Sugar Land to take the roster spot of RHP Brandon Bielak, who was optioned to Sugar Land after Friday night's game. . INF Robel Garcia, who was designated for assignment on Wednesday, cleared waivers and was outrighted to Sugar Land on Friday.

On Correa's sacrifice fly in the sixth, Gurriel might have left early from third to score. The Diamondbacks were out of challenges but were planning to appeal the play. Houston third base coach Omar Lopez, fearing that Gurriel had left early, sent Kyle Tucker to try to steal home. Tucker was caught stealing, and since there was a play, Arizona couldn't appeal Gurriel possibly leaving early.

''It looked to me that the Astros clearly thought that he would have been called out, the tagging runner from third to home, so Tucker was making a baseball play to engage the pitcher in order to lose our appealing process,'' Lovullo said. ''In that situation with second and third with no outs, I'll take two outs with one runner scored and nobody on every single time.''

Astros: OF Michael Brantley (right knee soreness) will resume baseball activities on Sunday, Baker said. . LHP Framber Valdez, who was scratched from his last scheduled start on Thursday with a cut on his left index finger, threw for a second straight day on Saturday, Baker said.

Astros: RHP Zack Greinke (11-6, 3.94) will start Sunday looking to end his recent struggles, as well. Greinke is 0-3 in his last three starts, allowing 16 runs over 15 innings in those outings.