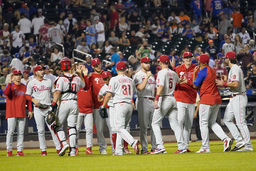 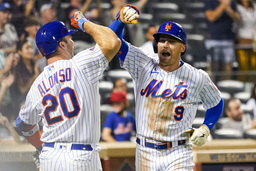 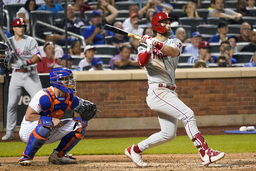 Philadelphia Phillies' Bryce Harper follows through on an RBI-double during the seventh inning of a baseball game against the New York Mets, Saturday, Sept. 18, 2021, in New York. (AP Photo/Mary Altaffer) 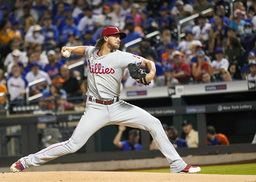 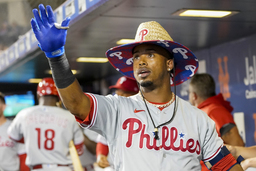 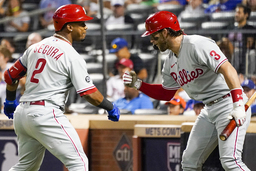 Bryce Harper drove in two runs to help Philadelphia win its fourth in a row and hurt the Mets' flickering playoff hopes.

The Phillies began the day two games behind Atlanta in the NL East. They stayed 2 1/2 games in back of St. Louis for the second NL wild-card spot.

The Mets lost their fifth straight and tied a season high by falling five games under .500.

Segura homered in the first inning and again in the third off Carlos Carrasco (1-3) for his sixth career two-homer game and first since Sept. 26, 2016, when he went deep twice for the Arizona Diamondbacks against the Washington Nationals.

Nola (8-8), who was 0-2 with a 5.10 ERA since his previous win July 25, allowed four hits and walked one with nine strikeouts in 5 2/3 innings. He carried a shutout into the sixth, when Brandon Nimmo tripled with one out and scored on Francisco Lindor's grounder.

Brad Miller and Freddy Galvis greeted Brad Hand with back-to-back doubles in the seventh. Harper hit a two-run, two-out double off Trevor May to extend the lead to 5-1.

Dominic Smith had a pinch-hit RBI single in the Mets seventh. Nimmo homered leading off the eighth.

Ian Kennedy threw a perfect ninth to earn his 24th save.

Nimmo's triple was the Mets' second in three games, their fifth of the month and eighth since Aug. 16, when Alonso tripled to end a major league-record 68-game streak without a triple. The Mets have 14 triples this season, tying the 1999 club for the franchise record for the fewest three-baggers in a full season.

Phillies: LF Andrew McCutchen was visited by a trainer and manager Joe Girardi after his diving catch to rob Jeff McNeil of a hit in the seventh. McCutchen remained in the game but left for pinch-runner Mickey Moniak after drawing a walk in the eighth.

Mets: RHP Noah Syndergaard (Tommy John surgery) is scheduled to throw batting practice Sunday. It will be his second time facing live batters since his rehab was interrupted by a positive COVID-19 diagnosis. . RHP Jacob deGrom (elbow) threw off the mid-slope Saturday but still has no timetable to face batters.