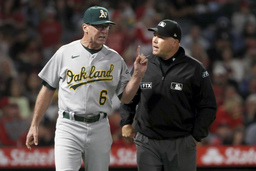 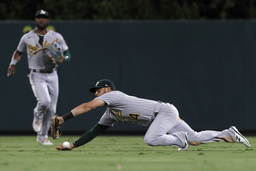 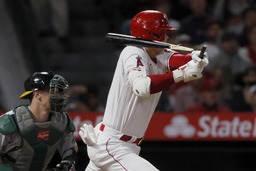 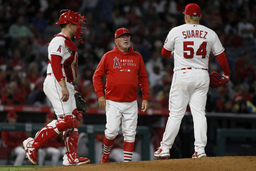 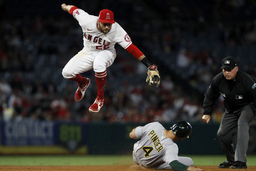 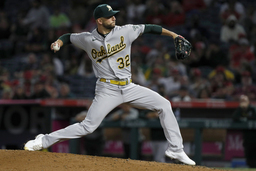 The A's have won four consecutive games and seven of 10 in their race for the second AL wild card. They're two games back of Toronto for the final postseason spot, with the Yankees also in the way.

Kaprielian (8-5) retired 18 of his 20 batters. He struck out five and walked none. He had been moved to the bullpen and didn't find out he would be starting Saturday until after he'd played catch Friday.

''My mentality is the same, it didn't really change anything,'' Kaprielian said of pitching in relief or starting roles. ''I probably threw more than I wanted yesterday because I didn't know until after I played catch. At the end of the year, whatever (manager Bob Melvin) asks me to do, I'll do. I just want to help this team win.''

The A's scored three runs in the first inning to give Kaprielian an early cushion. Los Angeles' Jose Rojas singled in the third and Jack Mayfield hit a double in the sixth. Other than those two hits, Kaprielian was in complete control.

Andrew Chafin earned his fifth save despite a shaky ninth. Chafin loaded the bases before second baseman Josh Harrison made an incredible leaping catch in the web of his glove for the final out.

''A guy we traded for going up and making that play, it's big time,'' Kaprielian said. ''Winner's win.''

Kaprielian rebounded after struggling his previous four starts in which he was he was 0-1 with an 8.10 ERA.

Jose Suarez (7-8) had a rough start with a three-run first - all on two outs - before settling down. He gave up six hits and struck out two in 5 2/3 innings.

Joe Maddon stopped him on the mound when he went to take him out of the game with a message.

''I told him, `Listen, you didn't have your best everything but you got deep in this game and that's a really good sign,''' Maddon said. ''I wanted him to take that away from his appearance. Here's a kid that pitched almost six innings against a really good ball club, did it based on a lot of guile and guts and the fact he's turning into a big-league pitcher.''

In the seventh inning, there was a disputed call on the second out of what was ruled a double play. Reliever Deolis Guerra dived to the ground after he caught the ball and tagged first, and then the ball came out of his glove. The call was challenged and overturned for what was deemed not having control of the ball, even though he already appeared to have recorded the out. When Melvin came out to argue, he got ejected, his fourth of the season.

Guerra and teammates, who were already celebrating the play in the dugout, had to come back out. Rojas singled in a run for the Angels' first of the game, but Guerra got Max Stassi to strike out looking for the final out of the inning.

Kaprielian made his 21st start of the season, which is the most by an A's rookie since 2017 when Jharel Cotton made 24 starts.

Shohei Ohtani was 2 for 4 with a run, and Rojas had two hits.

ON THE CAMPAIGN TRAIL

An impassioned Maddon was campaigning for second baseman David Fletcher to win a Gold Glove award, without even a question asked during a pregame media session.

''The fact that it's even considered a race just amazes me,'' Maddon said. ''If you're just going by a generated numerical metric, you're going to be deceived often. I haven't seen that body of work in a season, better than him. I'm going to say this, he's the best infielder. Him and (A's third baseman Matt) Chapman are two of the best infielders I've seen this year. Don't tell me there's anybody out there, both leagues, that play that position like he does.''

Athletics: RHP Daulton Jeffries (right elbow ulnar neuritis) was placed on the IL retroactive to Sept. 13. The Athletics don't believe it's a ligament issue. The A's will see how he is in a few days. He's 1-0 with a 3.60 ERA in five appearances with the A's this season. ... RHP Chris Bassit (surgery for facial fracture) threw a simulated game at Angel Stadium and is expected to throw again on Monday. He was hit by a line drive on Aug. 17 and is trying to return this season.

Angels: RHP Ohtani (9-2, 3.36) will go for his 10th win after there was consideration of shutting him down from pitching for the remainder of the season due to arm soreness. He gave up six earned run in a loss to Houston in his last start on Sept. 10. He is 6-0 with a 1.99 ERA at home this season.