White Sox-Tigers game postponed until Monday due to rain 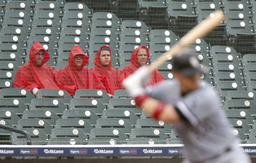 DETROIT (AP) Wednesday's game between the Chicago White Sox and the Detroit Tigers at Comerica Park has been postponed because of rain. The game will be made up on Monday at 1:10 p.m.

The Tigers stalled the White Sox's drive for the AL Central title with a 5-3 victory on Tuesday.

Chicago's magic number for clinching the division remain at two. It plays the second-place Cleveland Indians on the road in a five-game series beginning Thursday.

The White Sox are closing in on their first division title in 13 years.