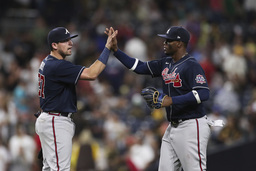 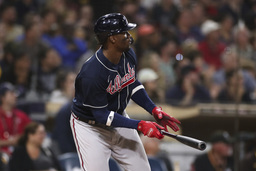 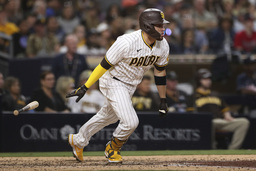 San Diego Padres' Victor Caratini runs to first base after hitting an RBI-single against the Atlanta Braves in the sixth inning of a baseball game Saturday, Sept. 25, 2021, in San Diego. (AP Photo/Derrick Tuskan) 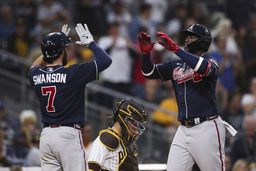 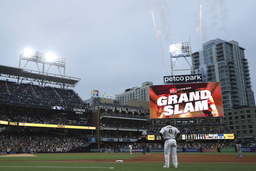 San Diego Padres' Manny Machado runs the bases after hitting a grand slam against the Atlanta Braves in the fifth inning of a baseball game Saturday, Sept. 25, 2021, in San Diego. (AP Photo/Derrick Tuskan) 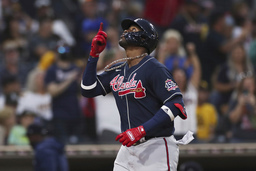 Atlanta Braves' Jorge Soler gestures to the sky as he nears home plate after hitting a three run home run against the San Diego Padres in the sixth inning of a baseball game Saturday, Sept. 25, 2021, in San Diego. (AP Photo/Derrick Tuskan) 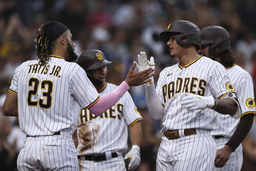 SAN DIEGO (AP) The Atlanta Braves got a whiff of October in late September.

The defending NL East champions fell behind the San Diego Padres three times - including on Manny Machado's grand slam - and came back each time to tie the game.

Because of their fight, they still hold a 1 1/2-game lead in the division while the underperforming Padres won't reach the postseason after a stunning collapse.

Jorge Soler hit a go-ahead double with one out in the 10th inning for his fourth RBI and the Braves won 10-8 on Saturday to stay 1 1/2 games ahead of Philadelphia while eliminating San Diego from playoff contention.

''That might have been one of the bigger, guttiest games I've ever seen a team play,'' Atlanta manager Brian Snitker said. ''What they could have done after the grand slam and how they roared back and just kept pounding, man, that kind of defines who these guys are, what they're all about.''

Snitker said the crowd of 39,026 at Petco Park - including many Braves fans - gave it the feel of a postseason game.

''At one point it felt like we were in a playoff situation, with the crowd going nuts,'' he said. ''It was like a playoff game.''

The Padres were one out from a win in regulation when Eddie Rosario hit a tying single off major league saves leader Mark Melancon, who was trying for his 39th.

Soler, who hit a three-run homer in the sixth, then helped seal the biggest collapse in Padres history with his hit off Daniel Hudson (5-3). Ozzie Albies added a sacrifice fly.

''The energy was sky-high, honestly, like I've never seen it before,'' Soler said through an interpreter. ''We were working our way back to the clubhouse and people were hooting and hollering and screaming. It was a big win.

''It was a huge win, especially considering the fact it felt like we were playing behind the entire game,'' Soler said. ''We kept overcoming the deficits and just kept battling back.''

San Diego, led by superstars Fernando Tatis Jr. and Machado and with a payroll of more than $170 million, had a one-game lead for the second NL wild card on Sept. 9 but then went into a devastating free-fall that cost the Padres a second consecutive postseason appearance.

Richard Rodriguez (5-4) pitched the ninth and Will Smith worked a perfect 10th for his 34th save.

After entering the season with World Series aspirations, the only thing left for the Padres (78-77) is to try to finish above .500. After Sunday's series finale against Atlanta, they conclude their season with three games at the Los Angeles Dodgers and three at NL West-leading San Francisco.

''Obviously we fell short and that's all that matters,'' Machado said. ''We're all down about it. We were expecting something that didn't happen but hey, it's part of the game. It's part of the grind.''

Machado hit a grand slam in a game that had some big swings, and Adam Frazier and Eric Hosmer also homered for the Padres. Victor Caratini hit a go-ahead single in the sixth.

Machado's slam with two outs in the fifth gave San Diego a 7-3 lead. It was his 12th career grand slam and the Padres' seventh this season. Machado has 27 homers.

The Braves came right back and tied it in the sixth when pinch-hitter Joc Pederson delivered an RBI double and Soler hit a three-run homer, all off Nabil Crismatt. It was Soler's 25th.

Caratini then regained the lead for the Padres with a single against Chris Martin.

All three Padres homers were off Huascar Ynoa. Frazier hit a leadoff homer, his fifth, and Hosmer homered leading off the second, his 12th. Starting pitcher Vince Velasquez added an RBI groundout in the second.

San Diego police are investigating the deaths of a woman and her 2-year-old son after they fell from the third level of Petco Park before the game, the San Diego Union-Tribune reported.

The woman, 40, and the boy were pronounced dead at 4:11 p.m., about 20 minutes after police were alerted to the incident, Lt. Andra Brown told the newspaper.

The pair fell from the third level concourse - the equivalent of six stories high - to the sidewalk below on Tony Gwynn Drive, Brown said.

Their names were not released; both lived in San Diego. The mother and child had been at a dining/concession area on the concourse level prior to the fall, Lt. Adam T. Sharki said. The child's father was at the ballpark when the deaths occurred, police reported.

Police told the Union-Tribune it is too early to know whether the fall was accidental or intentional but noted the victims' deaths ''appeared to be suspicious.''