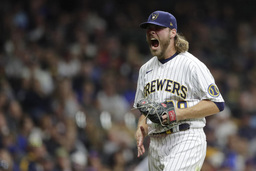 Milwaukee Brewers' Corbin Burnes reacts after striking out a batter during the seventh inning of a baseball game against the New York Mets Saturday, Sept. 25, 2021, in Milwaukee. (AP Photo/Aaron Gash) 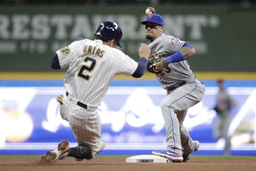 New York Mets' Javier Baez, right, tags out Milwaukee Brewers' Luis Urias (2) at second base as he throws to first to turn a double play during the sixth inning of a baseball game Saturday, Sept. 25, 2021, in Milwaukee. (AP Photo/Aaron Gash) 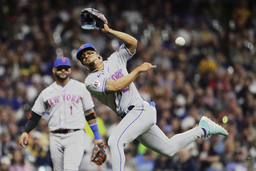 New York Mets' Francisco Lindor, right, is unable to throw Milwaukee Brewers' Eduardo Escobar out at first base during the sixth inning of a baseball game Saturday, Sept. 25, 2021, in Milwaukee. (AP Photo/Aaron Gash) 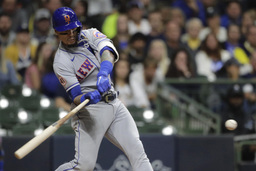 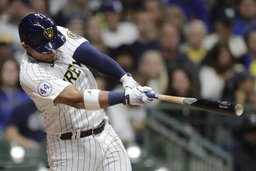 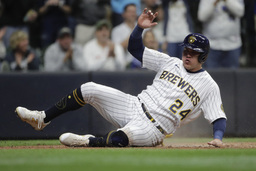 Milwaukee Brewers' Avisail Garcia (24) slides in safely at home to score on a single hit by Eduardo Escobar during the third inning of a baseball game against the New York Mets Saturday, Sept. 25, 2021, in Milwaukee. (AP Photo/Aaron Gash) 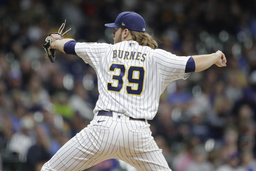 MILWAUKEE (AP) Corbin Burnes pitched seven brilliant innings to win his ninth consecutive decision and the Milwaukee Brewers moved to the brink of clinching the NL Central title with a 2-1 victory over the New York Mets on Saturday night.

The Brewers, already assured a fourth straight playoff berth, can wrap up the division crown Sunday with a win at home in the series finale against the Mets or a Cardinals loss to the Cubs in Chicago.

Milwaukee won its second straight following a five-game skid, including a four-game sweep at home by the second-place Cardinals, who have won a team-record 15 in a row.

New York (73-81) has lost 12 of 15 and was eliminated from playoff contention earlier in the day when Philadelphia beat Pittsburgh.

''I think it's pretty clear we didn't swing the bats well enough,'' outfielder Michael Conforto said when asked to assess the season.

Burnes (11-4) scattered five hits, struck out nine and walked one. Brad Boxberger, who had allowed 10 earned runs in his previous 5 1/3 innings, tossed a scoreless eighth, and Josh Hader worked the ninth for his 34th save in 35 opportunities.

''Corbin's having an incredible season, a Cy Young-worthy season, there's no question about it,'' Brewers manager Craig Counsell said. ''What he's done the last two months for us is nothing short of amazing. He's been amazing all year, but it feels like he's even picked it up a little bit as we kind of go down the stretch. That's what the great ones do and he's a great one right now. He's pitching like it.''

Eduardo Escobar drove in both runs for Milwaukee with a third-inning single off Rich Hill (6-8), who allowed just two hits in five innings.

Willy Adames and Avisail Garcia drew consecutive one-out walks in the third. Christian Yelich's groundout advanced the runners and Escobar followed with a single to left.

''I put that on myself with the walks,'' Hill said. ''I don't think that that puts us in a very good position. So, I'm just going to point the finger at myself and I think that's what I will do every single time I fail. It's not trying to look in another direction. You've got to look at yourself in the mirror and find out, hey, where did we fall short and how can we improve? That's across the board.''

Hill has allowed three earned runs or fewer in eight consecutive starts since Aug. 16, but is winless in 12 games, including 11 starts, since being acquired from Tampa Bay in July.

The Mets got one run back in the fourth when Conforto doubled with two outs and scored on Javier Baez's single.

Despite the Cardinals' winning streak, they are still seven games behind Milwaukee, which led the division by 14 games on Sept. 12.

''That tells you what we did for the course of 5 1/2 months vs. the last two weeks,'' Burnes said. ''We played good baseball most of the year. Obviously we had a little skid there last week, but probably good timing for that to happen, to kind of shake us all loose, wake us up a little bit and get us going. We're in a good spot.''

Mets: RHP Noah Syndergaard, recovering from Tommy John surgery in March 2020, struck out two and allowed one hit in one inning during his second rehab outing at Triple-A Syracuse.

Brewers: RHP Devin Williams, bothered by a strained right calf, is making progress. ''Devin's just going to play catch like a reliever, just have a normal day, and after he does that, we'll evaluate his game availability,'' Counsell said.

Mets: RHP Carlos Carrasco (1-3, 5.24 ERA) starts Sunday afternoon. Carrasco has struggled in the first inning this season, allowing 16 earned runs in 10 starts (14.60 ERA). Seven of the nine homers has given up have come in the first.