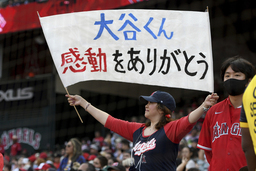 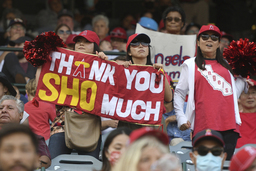 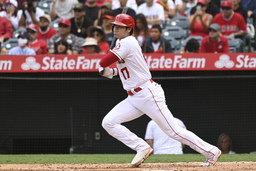 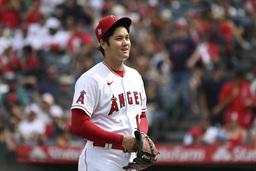 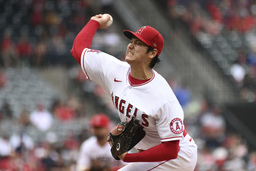 ANAHEIM, Calif. (AP) Shohei Ohtani pitched seven innings of one-run ball in his final game at Angel Stadium this season, striking out 10 Mariners amid the serenades of ''M-V-P!'' that have been the soundtrack to his summer.

Yet he left the mound with the score tied because his Los Angeles Angels teammates couldn't score more than one run, denying Ohtani a chance for his 10th victory. When the Angels' bullpen took over, its first two relievers swiftly surrendered four runs to playoff-contending Seattle in a 5-1 loss.

That sunny Sunday in Orange County neatly exemplified the gloomy context around the sensational season put together by Ohtani, a two-way superstar without precedent in the modern game.

Heading into the final week, Ohtani has 45 homers and 98 RBIs as a designated hitter along with a 3.18 ERA and 156 strikeouts on the mound. He is both one of the best pitchers and one of the best hitters in the major leagues, and he is widely expected to win his first AL MVP award this fall.

But baseball won't get to enjoy Ohtani's talents in the postseason because he plays for the Angels, a big-budget franchise mired in six consecutive losing seasons and seven straight non-playoff seasons, including all four of Ohtani's stateside campaigns. The Halos' loss to Seattle in their home finale was their 82nd of the season, officially extending the majors' longest active streak of losing.

''It's very frustrating, very disappointing,'' Ohtani said through his interpreter, Ippei Mizuhara. ''I always look forward to being in the playoff race at the end. I always think about that.''

The Angels have two works of baseball art, and owner Arte Moreno has hung them in a dingy, derelict gallery: Mike Trout has won two of his three MVP awards during the Angels' six-year losing skid, and Ohtani is likely to win the third.

Ohtani is tied to the Angels for two more seasons under the terms of his move from Japan to the majors in late 2017, but he hasn't had extension talks with the franchise beyond 2023. It's a bit too early to predict his future, but Ohtani clearly wants the Angels to get better soon - and he is unafraid to say it.

''I really like the team, I love the fans and the atmosphere of the team,'' Ohtani said. ''But more than that, I want to win. That's the biggest thing for me. So I'll leave it at that.''

Ohtani was the third prominent member of the Angels in the past week to publicly call out the team's personnel failures, particularly on a pitching staff that has been one of the majors' lousiest for years.

Trout, who hasn't played since May due to a nagging calf injury, and manager Joe Maddon both condemned the Halos' largely ineffective roster-building work in recent years under two general managers.

Four years after Ohtani chose the Angels, he has already played for three managers and two general managers. He still won the AL Rookie of the Year award before battling back from Tommy John surgery to become a unique star.

The current Angels appeared to have an imposing lineup, but their three highest-paid players all battled injuries. Trout and Anthony Rendon combined to play in just 94 games, and Justin Upton only made it through 89 while batting .211.

And the healthiest lineup in the world would have trouble elevating a pitching staff that has the 22nd-best ERA in the majors, adding another season to its years of ineptitude. Ohtani has been the best part of both groups for the Angels, but he can't do it alone.

''We were putting up a good fight through July, August, sticking around .500 and waiting for the guys to come back,'' Ohtani said. ''That was our motivation, but the guys didn't come back, so it was hard to keep that motivation up. If nothing changes on the team, I think it's going to be pretty hard to be in playoff contention.''

When the Angels faded from any pretense of playoff contention down the stretch, they decided to turn the rest of their season into a tryout for most of the significant prospects in their beleaguered farm system. Los Angeles has set franchise records by using 64 players and 40 pitchers this season - many of them simply not ready to make a significant major league contribution, if they ever will be.

That decision has left Ohtani playing out his breakthrough season alongside many teammates who began the year in Double-A and are highly unlikely to be important parts of the Angels in 2022.

Ohtani doesn't know whether he'll make one more mound start this weekend to take one last shot at his 10th victory - but after the Angels' season ends Sunday in Seattle, Ohtani will be out of the spotlight until the AL MVP winner is announced. Ohtani isn't campaigning for the award as he focuses on a strong finish to his bittersweet season.