Depth shows up for Cardinals during 16-game win streak 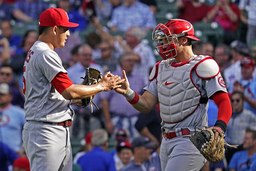 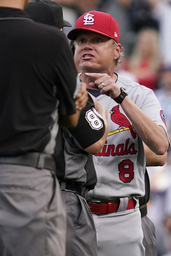 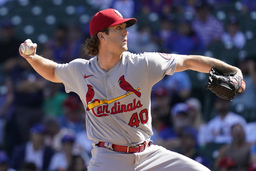 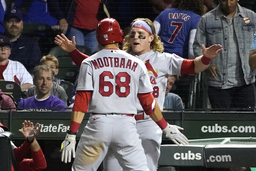 The St. Louis Cardinals are proving to be a lot more than their biggest stars - a Lars Nootbaar more.

The soaring Cardinals have won 16 in a row heading into Tuesday night's game against NL Central champion Milwaukee. It's the majors' longest streak since Cleveland took 22 in a row in 2017, and the best in the National League since the New York Giants won 16 straight in 1951 on their way to an improbable pennant.

''I think, finally, now, you know maybe at the most important time of the season, we're putting everything together and we're not trying to force anything,'' Knizner said. ''You see each game different guys stepping up, making big plays or making big pitches to win us a game.''

Each of St. Louis' big stars has pitched in. Goldschmidt is batting .383 with seven homers and 16 RBIs in his last 16 games. The 40-year-old Wainwright is 3-0 with a 3.52 ERA in September. Molina has six RBIs in his last six games, and Arenado has four homers and 12 RBIs during the streak.

But the Cardinals (87-69) are receiving positive contributions from all over their roster.

Gallegos has 10 saves and a sparkling 0.84 ERA over his last 11 games, solidifying the back end of St. Louis' bullpen. Nootbaar, a rookie outfielder, homered twice and scored five times during the Cardinals' four-game sweep of the Chicago Cubs. Whitley has a string of 12 consecutive scoreless relief appearances.

Mix in a breakout performance for Tyler O'Neill, who has a career-high 32 homers and 77 RBIs, and the Cards are hoping to turn a big finish into another successful October.

''Good teams have a deep roster (with) guys that can contribute,'' manager Mike Shildt said. ''The thing I love about our game is you never know who has to be on the mound, you don't who's going to take the at-bat, you don't know who he's going to hit it to.

''So we prepare for everything, and our guys have done a tremendous job.''

St. Louis showed off its depth during Sunday's 4-2 victory over the Cubs. The game was tied before a couple of role players keyed a two-run ninth.

Knizner, who backs up Molina behind the plate, led off with a walk. Nootbaar, who entered in the eighth as part of a double switch, followed with a perfectly placed bunt single. Tommy Edman then moved the runners over with a sacrifice.

After Goldschmidt was walked intentionally, Knizner scored on a wild pitch and Nootbaar scampered home on O'Neill's comebacker.

''We talk about this a lot. You know, we've done it: Win in a lot of different ways,'' Shildt said after the series finale at Wrigley Field. ''On the bases, get a bunt down. We've worked on our bunting a lot. We haven't been as successful as we'd like in certain circumstances, but it came into play today.''

Long before St. Louis pushed across the winning runs, Woodford kept the Cards in the game with a 5 1/3 innings of two-run ball. The right-hander is 1-0 with a 1.90 ERA in five appearances in September.

''I was just trying to go out there and do my job,'' Woodford said. ''I feel like during this hot streak we've had, it's kind of been a great representation of guys just showing up and doing whatever they can to contribute, top to bottom. ... We're just trying to play as clean of baseball as we can.''