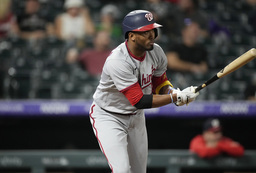 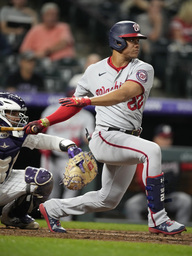 Washington Nationals' Juan Soto hits into a force play but drives in a run against Colorado Rockies starting pitcher German Marquez in the fifth inning of a baseball game Monday, Sept. 27, 2021, in Denver. (AP Photo/David Zalubowski) 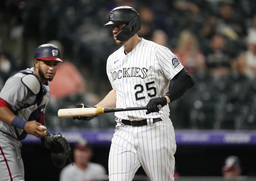 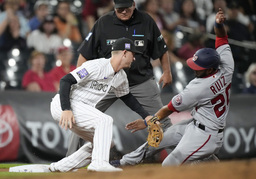 Colorado Rockies third baseman Ryan McMahon, left, tags out Washington Nationals' Keibert Ruiz as he tries to advance from first to third base on a single hit by Luis Garcia in the fourth inning of a baseball game Monday, Sept. 27, 2021, in Denver. (AP Photo/David Zalubowski) 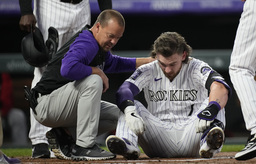 Colorado Rockies trainer Heath Townsend, left, helps Brendan Rodgers after he was hit by a pitch in the helmet by Washington Nationals starting pitcher Josiah Gray in the first inning of a baseball game Monday, Sept. 27, 2021, in Denver. (AP Photo/David Zalubowski) 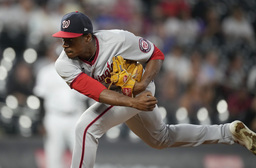 DENVER (AP) Josiah Gray pitched into the sixth inning to earn his second career win, and the Washington Nationals beat the Colorado Rockies 5-4 on Monday night.

Luis Garcia hit a two-run single and Alcides Escobar had three hits for the Nationals.

Gray (2-2), who made his major league debut with the Dodgers on July 20, has won consecutive starts.

The prized right-hander was acquired July 30 in the blockbuster trade that sent Max Scherzer and Trea Turner to Los Angeles. Gray got his first win at Miami last Wednesday when he struck out eight Marlins.

He allowed just two hits through five innings Monday but loaded the bases in the sixth with two walks and a single. Ryan McMahon's double to center field cleared the bases and cut Washington's lead to 4-3.

''I want to be pitching for years and years and it won't be the first time I'm throwing with baserunners on,'' Gray said. ''It's something you do, you take the punches as you can and you go out and make the pitches.''

Colorado couldn't generate more offense against the Nationals' bullpen. The Rockies have lost 10 of 11 home games, including two three-game sweeps by the San Francisco Giants.

Colorado starter German Marquez (12-11) struggled with his location in the fourth when Washington took the lead. He hit Josh Bell on the foot with a pitch to put runners on first and second and then walked Keibert Ruiz with the bases loaded to force in the first run.

Marquez gave up a two-run single to Garcia to make it 3-0. Juan Soto drove in another run with a groundout in the fifth, and Escobar had an RBI single in the ninth.

''His stuff is reading out fairly normal but there might not be the crispness, and that's when you have to pitch a little bit more,'' Rockies manager Bud Black said about Marquez. ''You can't beat yourself with walks, hit by pitches, because they will come back to bite you.''

Marquez has pitched 180 innings this season after a shortened 2020 and acknowledged he feels some fatigue.

Tanner Rainey allowed an RBI double to C.J. Cron in the bottom of the ninth before getting McMahon to ground out for his third save.

''He got three big outs in a closer role and that's a great sign for us,'' Martinez said.

Colorado second baseman Brendan Rodgers was hit in the helmet by Gray's 92 mph fastball in the first inning. He fell to the ground and lay on the dirt as he was examined by a team trainer.

Rodgers got to a sitting position and eventually to his feet and stood before walking straight to the dugout. Garrett Hampson came on to run for Rodgers and stayed in the game at second base.

The Rockies later announced that Rodgers had passed all concussion protocols and was being monitored.

''He's doing fine,'' Black said after the game. ''He was obviously a little scared when he was down on the ground. Those are always scary, you never want to see that. The ball got away from him, no intent from the young pitcher.''