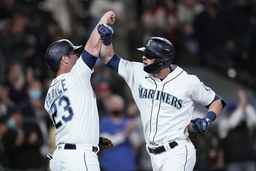 Seattle Mariners' Mitch Haniger, right, is greeted by Ty France (23) after hitting a three-run home run against the Oakland Athletics in the fourth inning of a baseball game Monday, Sept. 27, 2021, in Seattle. (AP Photo/Elaine Thompson) 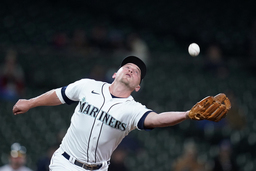 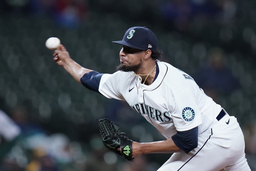 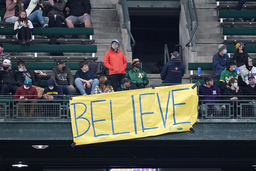 A "Believe" sign, similar to one seen in the TV series "Ted Lasso," hangs from outfield seats as fans look on during a baseball game between the Seattle Mariners and Oakland Athletics Monday, Sept. 27, 2021, in Seattle. (AP Photo/Elaine Thompson) 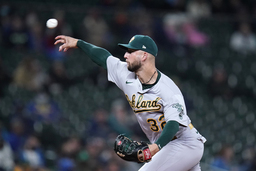 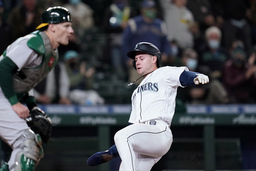 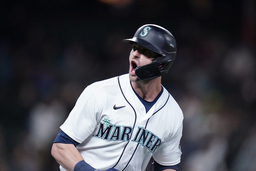 Seattle Mariners' Mitch Haniger yells as he begins to round the bases on his three-run home run against the Oakland Athletics in the fourth inning of a baseball game Monday, Sept. 27, 2021, in Seattle. (AP Photo/Elaine Thompson) 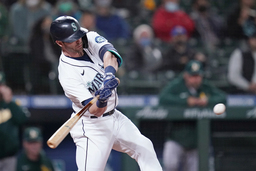 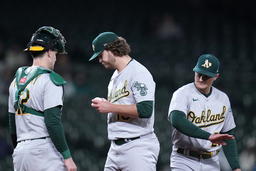 Seattle's 10th straight victory against Oakland tied the team record for most consecutive wins against a single opponent. The Mariners have won eight of nine overall and nine of their last 11.

''We're fighting for that spot,'' starting pitcher Chris Flexen said. ''We want it and we're playing like we want it.''

Seattle is 1 1/2 games behind Boston for the second wild card, with Toronto a game back of the Red Sox. Both those teams were off Monday.

''We've got five games left and here we sit,'' Mariners manager Scott Servais said. ''This is some kind of season we've had and we've still got a lot to play for, so we'll see what tomorrow brings.''

Oakland fell 3 1/2 games behind Boston and two back of the Mariners with two more games to play in Seattle. The A's, last year's AL West champions, also were eliminated from the division race.

Haniger hit his first three-run homer to the bullpen in left field during a five-run fourth inning, then put the game away with his second shot to nearly the same spot in the sixth. He has 37 homers this season after sitting out for 18 months following two surgeries.

The usually reserved Haniger acknowledged being taken by the importance of the moment.

''These games are so meaningful coming in the last week of the season, and so every inning, every pitch is big,'' the right fielder said.

Ty France reached base five times for Seattle, going 4 for 4 with a walk and four RBIs. J.P. Crawford added three hits and an RBI. Each scored three runs.

The Mariners picked up their 21st win with Flexen (14-6) starting on the mound. The right-hander struck out six, giving up four earned runs and seven hits in five innings.

Seth Brown gave Oakland starter Cole Irvin (10-15) a 3-0 lead with a three-run homer in the first - part of four consecutive hits by the A's. But he left after walking the first two batters he faced in the fourth, and reliever Deolis Guerra gave up run-scoring singles to Crawford and France to set up Haniger's first homer.

''There's no panic,'' Haniger said. ''I feel like we've had that kind of vibe and energy from the beginning of the season, that it doesn't matter when we're down. ... Tonight we get down 3-0, and we come in the dugout and we're like, `We're going to score more than three runs, no big deal. Flex, keep us in there,' and he did a great job.

Seattle reliever Casey Sadler extended his major league-leading scoreless streak to 25 appearances and 23 2/3 innings with three groundouts in the sixth. The bullpen combined for four scoreless innings, with Matt Andriese striking out the side in the ninth.

''They've won a lot of close games,'' Melvin said. ''Their bullpen, when they come in the game late and they have a lead, they seem to finish it off every time. ... We've had their starters on the ropes quite a few times.''

The Mariners can set the team record for consecutive wins against one opponent when they play Oakland on Tuesday. Their previous 10-game winning streaks over a single foe came against Kansas City in 1985 and Baltimore in 2001.

Seattle sent former starter Justus Sheffield to Triple-A Tacoma and recalled RHP Wyatt Mills. Sheffield was moved to the bullpen after returning this month from a stint on the injured list due to a strained left forearm. Servais said the Mariners needed pitchers they could rely on down the stretch with a wild-card spot on the line, and Sheffield has struggled since returning. He gave up a hit and walked five while allowing three runs in an inning in his last appearance, a 14-1 loss to the Angels on Saturday.

Athletics: OF Starling Marte (strained left lat) and 2B Josh Harrison (strained quad) are both day-to-day after aggravating injuries Sunday. Melvin said Marte strained the muscle Saturday during an at-bat, and though he was able to play Sunday, the injury worsened. Harrison was pulled from Sunday's game after making a dive for a grounder that aggravated an old injury. Oakland called up OF Luis Barrera for a healthy hitter on the bench and designated RHP Michael Feliz for assignment.

Athletics: RHP Chris Bassitt (12-4, 3.16 ERA) makes his second straight start against the Mariners since returning from the injured list following surgery to repair a facial fracture. He gave up one hit over three innings in a no-decision against Seattle last Thursday.

Mariners: Servais said LHP Tyler Anderson (7-10, 4.46) will pitch Tuesday night in place of Yusei Kikuchi. The left-hander started strong this season and made the All-Star team, but he's been struggling the last month and will be available out of the bullpen. Anderson went just two innings in his last outing Saturday and will be on a shorter pitch count than usual.