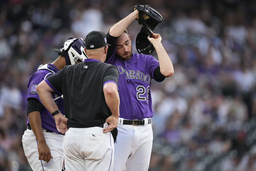 Gomber was replaced on the mound by Jhoulys Chacin. There was no immediate word from the Rockies on the reason for his departure.

Gomber allowed two runs and four hits with one strikeout before leaving. Both of the runs scored in the first inning, bringing an end to his streak of 23 1/3 innings without allowing an earned run at Coors Field. He had last allowed an earned run at home in the second inning of his April 21 start versus Houston.