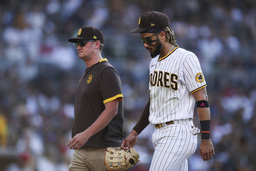 San Diego Padres shortstop Fernando Tatis Jr., right, walks off the field with a trainer in the fifth inning of a baseball game against the Cincinnati Reds, Saturday, June 19, 2021, in San Diego. (AP Photo/Derrick Tuskan) 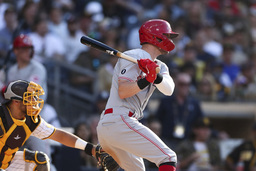 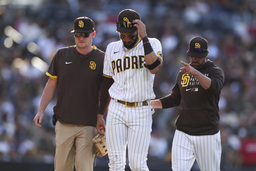 San Diego Padres shortstop Fernando Tatis Jr., center, walks off the field with manager Jayce Tingler, right, after diving for a ball in the fifth inning of a baseball game against the Cincinnati Reds, Saturday, June 19, 2021, in San Diego. (AP Photo/Derrick Tuskan) 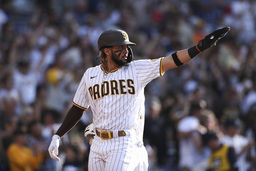 San Diego Padres' Fernando Tatis Jr. points toward second base after scoring on a double hit by Manny Machado in the fourth inning of a baseball game against the Cincinnati Reds, Saturday, June 19, 2021, in San Diego. (AP Photo/Derrick Tuskan) 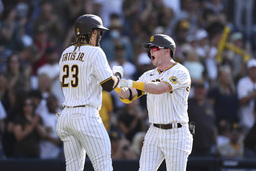 San Diego Padres' Jake Cronenworth, right, celebrates with Fernando Tatis Jr. (23) after hitting a two-run home run that scored them in the third inning of a baseball game against the Cincinnati Reds, Saturday, June 19, 2021, in San Diego. (AP Photo/Derrick Tuskan)

Three innings after Tatis walked off the field after reinjuring his left shoulder, his replacement, rookie Kim Ha-seong, sent Petco Park into a frenzy when he hit a two-run home run with two outs in the eighth inning to lead the Padres to a wild 7-5 win against the Cincinnati Reds.

As he approached the dugout following his trot, Kim called for Manny Machado to drape the ''Swagg Chain'' - a garish necklace used to celebrate big moments - around his neck. The South Korean then danced in the dugout to ''Gangnam Style,'' delighting the crowd even more.

''He was up there battling and then all of a sudden you start to hear the stadium, the fans, just chanting his name, and when he hit that ball the place just erupted,'' manager Jayce Tingler said.

''If you panned into the dugout and just see the true happiness of his teammates, and just know how much this guy is loved and how hard he's worked to adjust to everything over here, so for him to have that moment I thought was huge.''

Kim, a 25-year-old former Korean Baseball Organization star who signed with the Padres in the offseason, said through a translator that he felt ''pure joy. I was just enjoying the moment, I was so happy, that's about it. Nothing else, just happiness.''

Kim homered on a 1-2 pitch from Heath Hembree (1-2) to bring in Tommy Pham, aboard on a double. It was Kim's fourth. Nabil Crismatt (2-1) got the win. Mark Melancon pitched the ninth for his big league-leading 20th save.

The wild day also included Reds star Joey Votto and manager David Bell getting ejected in a wild scene in the first inning.

The Padres will go for a four-game sweep Sunday. The Padres came into this series having lost 13 of 17, including being swept at lowly Colorado, while the Reds came in on a six-game winning streak.

Tatis left after diving to his right for Tyler Naquin's single in the three-run fifth, when the Reds tied it at 5. Tatis extended his left arm as he landed and immediately reached for his shoulder, which he partially dislocated taking a violent swing against San Francisco on April 5. That injury landed him on the 10-day injured list.

Tatis was immediately checked by an athletic trainer as Tingler came out to make a pitching change. Tingler then checked on Tatis, who was looked to be in discomfort as he left the game.

Tingler said Tatis lobbied to stay in the game but the team wanted to be cautious. He said Tatis felt sore and is listed as day-to-day.

''We feel like we're in a fairly decent position,'' Tingler said. ''The trainers think it's nowhere near where it's been earlier on in the year.''

The electrifying Tatis signed the longest contract in baseball history in February, for 14 years and $340 million.

Votto and Bell were ejected in the first inning. Catcher Webster Rivas appealed after Votto offered at the high, outside pitch from Miguel Diaz, and third base umpire Chris Guccione confirmed Votto went around.

Votto was unhappy and began arguing, and Bell came out of the dugout and joined the argument. Bell and coaches Delino DeShields and Freddie Benavides had to keep Votto away from plate umpire Ryan Additon, who then apparently ejected both player and manager, although Bell didn't realize it at the time.

Votto had to be restrained as he continued to argue. Shortly after Votto went to the dugout, a Padres fan seated near the visiting dugout was ejected. Bell went back to the dugout and said he was getting ready to resume managing the game when he was called back out and was told by the umpires that he was ejected, too.

The Padres took a 5-2 lead when Machado hit a bases-loaded double into the left field corner with two outs in the fourth.

But the Reds tied it in the fifth, when they broke through against 28-year-old rookie Daniel Camarena after the local product had thrown two impressive innings in his big league debut.

Rookie Jonathan Indian and Jesse Winker opened the fifth with singles before Camarena got two outs. Tatis was hurt diving for Naquin's RBI single, which chased Camarena. James Norwood came on and walked Tyler Stephenson before Eugenio Suarez hit a two-run single to tie it.

Jake Cronenworth hit a tying, two-run homer in the third for the Padres, his eighth.

Camarena, who went to San Diego's Cathedral Catholic High, retired six of the first eight batters he faced. He retired the side in the third, including baseball's two hottest hitters, Winker and Nick Castellanos. After putting runners on the corners with no outs in the fourth, he again retired the side.