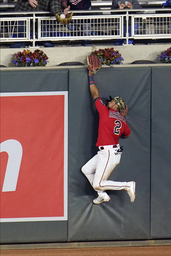 Minnesota Twins left fielder Luis Arraez cannot reach a fly ball off the bat of Oakland Athletics' Mark Canha for a solo home run in the eighth inning of a baseball game, Friday, May 14, 2021, in Minneapolis. (AP Photo/Jim Mone) 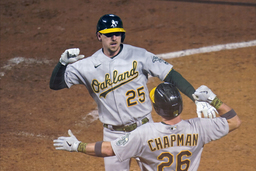 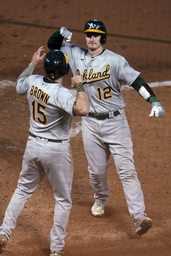 Oakland Athletics' Sean Murphy (12) is congratulated by Seth Brown on his two-run home run off Minnesota Twins pitcher Matt Shoemaker during the fifth inning of a baseball game Friday, May 14, 2021, in Minneapolis. (AP Photo/Jim Mone) 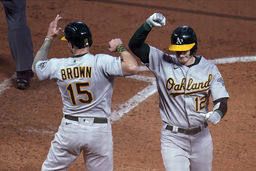 Oakland Athletics' Sean Murphy (12) is congratulated by Seth Brown on his two-run home run off Minnesota Twins pitcher Matt Shoemaker during the fifth inning of a baseball game, Friday, May 14, 2021, in Minneapolis. (AP Photo/Jim Mone) 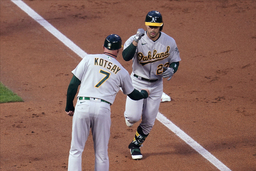 Oakland Athletics' Ramon Laureano (22) is congratulated by third base coach Mark Kotsay as he jogs home on a solo home run off Minnesota Twins pitcher Matt Shoemaker during the third inning of a baseball game Friday, May 14, 2021, in Minneapolis. (AP Photo/Jim Mone) 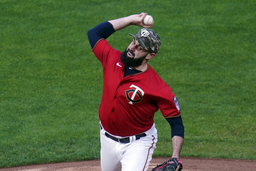 Minnesota Twins pitcher Matt Shoemaker (32) throws to an Oakland Athletics batter during the first inning of a baseball game Friday, May 14, 2021, in Minneapolis. (AP Photo/Jim Mone) 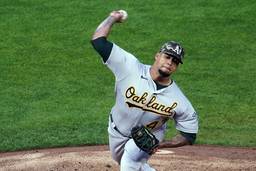 Oakland Athletics pitcher Frankie Montas throws to a Minnesota Twins batter during the first inning of a baseball game Friday, May 14, 2021, in Minneapolis. (AP Photo/Jim Mone)

Sean Murphy and Stephen Piscotty each hit a two-run shot, and Mark Canha contributed a pinch-hit homer. The Athletics have won five of seven.

''This seems like it doesn't play small,'' Oakland manager Bob Melvin said of Target Field. ''But just visually, it's kind of a fun place to hit homers. You can hit them in upper decks. You can hit them out on the street in right field. It's like a really good whiffle-ball field where there's a good visual for homers, maybe.''

Part of the rough April was a four-inning, six-run outing against Minnesota.

''I feel like last time, I did throw a lot of fastballs and I was like missing my spots a lot,'' Montas said. ''I didn't have my breaking stuff that day. My slider wasn't good. Today, I feel like my slider was way better than it was last time. I was able to hit my spots today.''

Matt Shoemaker (2-4) allowed three of the home runs for the Twins. He surrendered five runs in six innings.

''That's what makes it so frustrating,'' Shoemaker said. ''I feel like I threw the ball, overall, really well. Just a few of the mistakes really did damage.''

Josh Donaldson homered for Minnesota, which has lost five games in a row.

Laureano connected for his eighth homer of the season, a two-out solo drive in the third. Murphy added his fifth homer in the fifth, and Piscotty followed an inning later with his fourth.

Walks preceded the homers for Murphy and Piscotty.

''You walk a guy, give up a homer,'' Minnesota manager Rocco Baldelli said. ''When things are really not going your way, that's what happens.''

Montas kept the Twins off the board until Donaldson's leadoff homer in the sixth.

With Minnesota governor Tim Walz relaxing the state's COVID-19 restrictions, including lifting the mask mandate, the Twins opened Target Field to 60% capacity starting with Friday's game. The 60% capacity will be in effect for the remaining games in May, and the team is planning for an 80% capacity for its 12 home games in June.

Athletics: INF/OF Chad Pinder was reinstated from the injured list after missing 35 games with a sprained left knee. Vimael Machin was optioned to Triple-A Las Vegas but will remain with the team on the road trip as part of the taxi squad. ... LHP A.J. Puk was scheduled for another Triple-A rehab appearance on Friday for Las Vegas. He has missed 33 games with a strained left biceps. ... Melvin said LHP Jesus Luzardo is throwing up to 60 feet in his rehab from a fractured left hand. Luzardo has not advanced to bullpen work yet.

Twins: OF Jake Cave was unavailable because of a stress reaction in his lower back. He will be re-evaluated before Saturday's game. . OF Alex Kirilloff has been taking part in baseball activities, including taking dry swings, as he recovers from a right wrist sprain. ... OF Byron Buxton (right hip strain) was playing catch before the game, but he hasn't started running. There is still no timeline for his return.