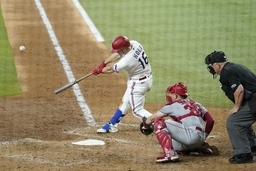 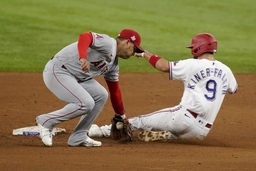 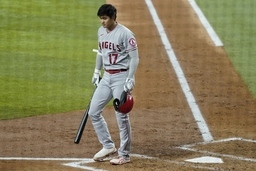 Los Angeles Angels' Shohei Ohtani walks to the dugout after striking out in the third inning of a baseball game against the Texas Rangers in Arlington, Texas, Monday, Aug. 2, 2021. (AP Photo/Tony Gutierrez) 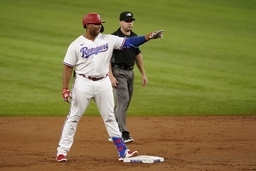 Texas Rangers' Curtis Terry stands on the bag in front of umpire Nick Mahrley after hitting a double off of Los Angeles Angels starter Chris Rodriguez in the second inning of a baseball game in Arlington, Texas, Monday, Aug. 2, 2021. It was Terry's first major league hit. (AP Photo/Tony Gutierrez) 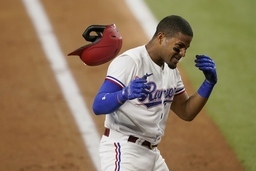 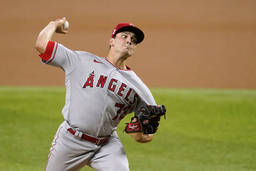 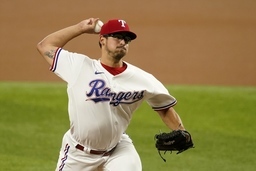 ARLINGTON, Texas (AP) Texas Rangers manager Chris Woodward and his last-place team are starting to have a little fun, and seem to have already gotten over the sting of trading away their homegrown All-Star slugger, an All-Star starting pitcher and their closer.

They have won three games in a row, the latest going ahead with a steal of home after consecutive wins when they won on game-ending homers by their rookie switch-hitting catcher.

Dane Dunning won consecutive starts for the first time this season, Brock Holt scored the tiebreaking run with a headfirst slide into home on the back-end of a double steal in the fifth inning and the Rangers beat the Los Angels Angels 4-1 on Monday night.

''That was probably our best game all year, just execution wise, just the way we played the game,'' Woodward said. ''We looked relaxed.''

Holt got the Rangers' second steal of home this season, and later added a sacrifice fly.

Dunning (5-7) got Shohei Ohtani out for the third time, on a ground ball ending the top of the fifth. That was the last batter for Dunning, who struck out three, walked two and allowed one run on three hits.

Spencer Patton worked the ninth for his first big league save in three chances this season (and 73 appearance overalls). That wrapped up four perfect innings by a trio of relievers for the Rangers, who had lost 14 of 15 before their winning streak.

''I told a lot of the guys after the game, that's kind of the vision you have for a winning ballclub,'' Woodward said. ''There was a calmness about our guys. We've been preaching this for three years now, so I don't know if it's after the (trade) deadline or if they just feel like, obviously, it's a good unit, good group of guys. But we need to see that more often. And if we can do that every night, we give ourselves a chance.''

Angels right-hander Chris Rodriguez (2-1) struck out seven and walked two while allowing four runs (three earned) and four hits while pitching into the seventh of his first big league start.

Rodriguez made 13 relief appearances earlier this season for the Angels before being sent to the minors June 21 to become a starter. His first MLB start came a day after Reid Detmers, the only higher-rated pitching prospect in the Angels organization, made his.

''Being able to throw after he did, it's a blessing,'' Rodriguez said. ''We can have conversations about our starts and keep on growing together.''

Holt was in a 3-for-36 slide before his double in the fifth. He went to third after Isiah Kiner-Falefa reached on a fielder's choice that was the second out. Kiner-Falefa drew a throw from catcher Max Stassi as he stole second, and Holt then took off and beat a one-hop throw back to the plate by shortstop Jose Iglesias for a 2-1 lead.

''We had a different sign on, we kind of got messed up on the field,'' Maddon said. ''That's not what we wanted to do.''

Ohtani hasn't missed a game at designated hitter since getting hit on his pitching thumb by a foul ball into the dugout last Wednesday. The Angels skipped the right-hander's scheduled pitching start Sunday, but Maddon said the two-way standout will return to the mound for Wednesday night's game against the Rangers. Maddon said Ohtani ''felt good'' after throwing before Monday's game.

Rangers reliever Joe Barlow entered in the eighth and struck out Jack Mayfield. It was the eighth consecutive batter Barlow struck out over a five-game span. That broke the club record of seven consecutive strikeouts that had been shared by three, including Hall of Famer pitcher Nolan Ryan. The streak ended with a groundout. ... Rangers DH Curtis Terry, who had a double in the second for his first hit after going 0 for 20 since his big league debut July 23, added a a single in the seventh to chase Rodriguez.

Rangers: Second baseman Andy Ibanez stayed in the game after he got hit by a pitch near his left wrist batting in the second inning, and then scored on a wild pitch. He also had a tremendous defensive play that inning, with a sliding backhanded stop of Stassi's grounder up the middle and a throw from his rear end for the out at first.

Jordan Lyles (5-7, 5.04) is winless in his three starts for Texas since the All-Star break and has allowed 25 homers overall. Angels lefty Jose Suarez (4-4, 3.45) is starting for the fifth time since the end of June after making his first nine appearances as a reliever.