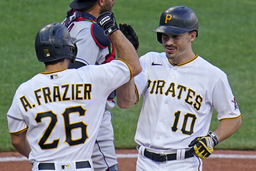 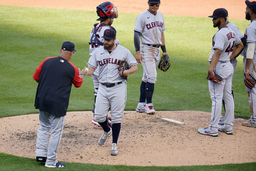 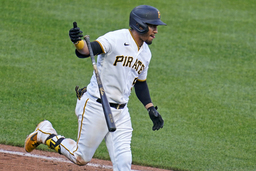 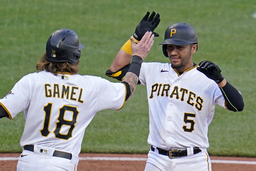 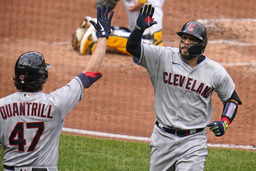 PITTSBURGH (AP) Michael Perez and Bryan Reynolds hit three-run home runs during the seventh inning and the Pittsburgh Pirates rallied for a 6-3 victory over the Cleveland Indians on Saturday.

Perez homered to right off Bryan Shaw (1-2) to put the Pirates ahead. Four batters later, Reynolds hit a 98 mph fastball from James Karinchak that sailed over the stands in right, bounced into the Allegheny River and was measured at 428 feet.

Down 2-0 entering the seventh, the Pirates were aided by six walks, three each by Shaw and Karinchak. It is the most walks the Pirates have drawn in an inning since also coaxing six bases on balls in 1976 against the St. Louis Cardinals.

''The six walks give you so many opportunities to score, but I like them when they are mixed in with homers. I'll take that,'' Pittsburgh manager Derek Shelton said.

Perez's home run was his fifth of the season in the backup catcher's 27 games. Prior to this season, he had gone deep just twice in 84 games.

''Lately, I've been feeling great in the box,'' said Perez, who was claimed off waivers from Tampa Bay in the offseason. ''My mindset and mentality is to get a good at-bat, go into the box with a good plan and stay on top of the ball and hopefully execute the plan.''

Reynolds has a team-leading 12 homers. He has homered five times in 16 games in June while batting .345.

''I feel good up there,'' Reynolds said. ''I feel like the timing is good and all that good stuff. I'm just trying to keep it rolling and put the barrel on the ball consistently.''

Pittsburgh has won the first two games of the series after entering on a 10-game losing streak.

The Pirates rallied against two of the Indians' best relievers.

''It's uncharacteristic and it proves they're human,'' Cleveland manager Terry Francona said. ''We ask a lot of them, and we'll continue to because we think a lot of them. We hurt today but we'll put it behind us and get them tomorrow.''

Home runs accounted for all the game's scoring. Cleveland's Harold Ramirez hit two solo shots, in the second and ninth innings, and Rene Rivera had a solo homer in the third.

The Indians had won four games in a row and six of seven prior to arriving in Pittsburgh.

''I though he pitched his heart out,'' Francona said.

The hot dogs were from the Brighton Hot Dog Shoppe in New Brighton, Pa., a town 30 miles north of Pittsburgh where Francona grew up. A sizeable contingent of fans from New Brighton were on hand.

Pirates general manager Ben Cherington said the volume of phone calls from teams interested in making trades ''feels like it has picked up a little bit'' in recent days.

In last place in the NL Central, the Pirates will likely look to continue trading players for prospects as they did during the winter when they dealt RHP Joe Musgrove to San Diego, RHP Jameson Taillon to the New York Yankees and 1B Josh Bell to Washington.

Indians: 3B Jose Ramirez (bruised left foot) sat out a day after being hit by a pitch in the eighth inning and leaving the game. He is likely to play Sunday.

It will be a matchup of rookies Sunday when Indians LHP Sam Hentges (1-1, 7.57) faces Pirates RHP JT Brubaker (4-5, 3.88). Hentges will be making his first start since May 30 after pitching in relief in his last three games. Brubaker allowed eight runs in eight innings in two starts against the Indians last season, though he did not factor in the decision in either game.