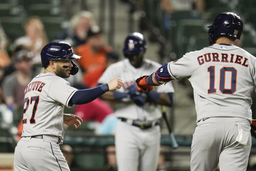 Houston Astros' Jose Altuve, left, gives a fist bump to Yuli Gurriel (10) after Gurriel drove him home on a sacrifice fly ball against the Baltimore Orioles during the seventh inning of a baseball game, Monday, June 21, 2021, in Baltimore. (AP Photo/Julio Cortez) 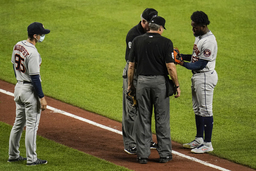 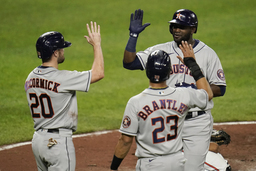 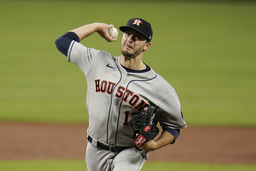 A no-hitter would have been nice, but the Astros have plenty of other things to feel good about.

Odorizzi and the Houston bullpen took a bid for a combined no-hitter into the eighth inning Monday night, eventually settling for a 10-2 victory over the Baltimore Orioles. Houston now leads the AL West by a game over Oakland, which lost at Texas.

The 31-year-old Odorizzi missed more than a month with a strained muscle in his right arm. This was his fifth appearance and fourth start since returning. He retired his first 13 batters before walking DJ Stewart on a full count in the fifth.

''I'm happy with the way I'm progressing,'' Odorizzi said. ''I knew it was going to be a process. I stuck to that process, and I feel more and more comfortable every time I'm on the mound.''

Maikel Franco hit a two-run homer with one out in the eighth off Brandon Bielak, breaking up the no-hitter. Odorizzi and reliever Cristian Javier held the Orioles without a hit through seven.

The start of the game was delayed by rain for an hour, and there was also a 41-minute rain delay during the top of the eighth. That came after the teams played for a while in a driving rain, with puddles forming in the infield.

''This grounds crew - they appear like they're used to rain delays,'' Astros manager Dusty Baker said. ''Every time I've been here in a three-day period, there's always been a rain delay, so I give the grounds crew a lot of credit for doing a great job.''

Bielak came on to pitch the bottom of the eighth for Houston. After he hit Austin Hays in the back of the helmet with a breaking ball - just the second baserunner for Baltimore - Franco sent a drive to deep center field.

Earlier in Franco's at-bat, Bielak appeared to have thrown strike three, but he didn't get the call from plate umpire Angel Hernandez.

Stevie Wilkerson followed with a single up the middle, and the Orioles finished with two hits.

In a season when pitchers have dominated - and on the day umpires began checking them for illegal foreign substances - Odorizzi (2-3) didn't seem the least bit bothered. He struck out nine and threw 86 pitches, three shy of his season high.

The Astros threw the most recent combined no-hitter in the majors, when Aaron Sanchez, Will Harris, Joe Biagini and Chris Devenski blanked Seattle on Aug. 3, 2019.

There has only been one no-hitter at Camden Yards in Baltimore. That was by Boston's Hideo Nomo on April 4, 2001.

''It wasn't very fun,'' Orioles manager Brandon Hyde said. ''We struggled offensively and gave up 10 runs, and there was ... the eighth inning with the rain.''

Odorizzi has gone five straight starts against Baltimore without allowing an earned run.

''There's a lot of guys I had never faced before tonight,'' Odorizzi said. ''I don't know. Sometimes you just do well against certain teams, certain mounds. I kind of enjoy pitching here. It's got a good backdrop.''

Orioles: Baltimore put RHP Cesar Valdez (lower back strain) on the 10-day injured list and recalled RHP Travis Lakins Sr. from Triple-A Norfolk. ... OF Anthony Santander had the night off. He returned a month ago from a sprained left ankle, and Hyde said Santander has a little soreness.