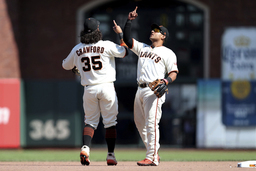 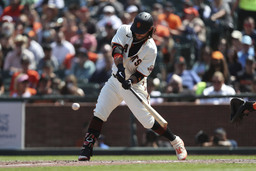 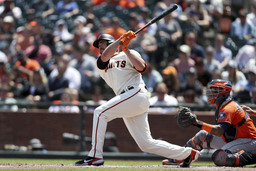 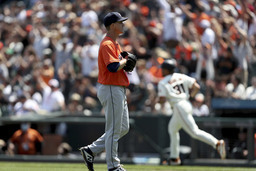 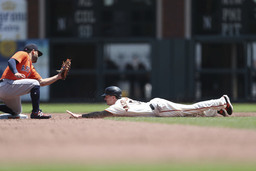 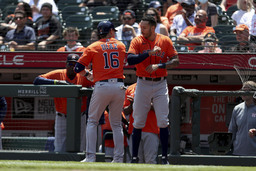 Brandon Crawford hit a tiebreaking single in the sixth inning for the Giants.

Aledmys Diaz homered twice on his 31st birthday for the Astros, who lost in manager Dusty Baker's return after serving a one-game suspension.

The Giants lead the NL with 156 home runs, but had gone a season-high four games without one before Solano's two-out drive in the second.

After Flores connected for a two-run homer in the third, Wade homered into McCovey Cove in the fourth. The ball sailed over his mother, who was standing on the walkway behind the seats in right field.

Ruf homered in the fifth. Yastrzemski hit his 17th home run in the eighth.

Crawford's two-out RBI single off Cristian Javier drove in Ruf, who reached on a two-out single off Blake Taylor (2-3).

Jay Jackson (2-0) retired three batters to win. Jake McGee pitched the ninth for his 22nd save.

Diaz hit a two-run homer in the third and a solo shot in the fifth, both off Giants starter Alex Wood.

The Astros made it 6-all on Martin Maldonado's homer in the top of the sixth.

Newly acquired Kris Bryant was not with the Giants. He was flying from Chicago to San Francisco and expected to arrive Saturday night. Manager Gabe Kapler expects the four-time All-Star to be in the lineup Sunday.

On a day when both teams had troubles on defense, Crawford continued his stellar fielding. The three-time Gold Glove shortstop ranged far to his left to get to Chas McCormick's grounder in the fourth, did a full spin then made a strong throw to first for the out.

The Astros added RHP Phil Maton to the active roster. Acquired in a trade with Cleveland, he pitched a scoreless inning and struck out three.

Houston called up OF Jake Meyers from Triple-A Sugar Land and optioned RHP Bryan Abreu to the taxi squad and RHP Brandon Bielak to Sugar Land. RHP Nivaldo Rodriguez was designated for assignment.

Astros: 3B Alex Bregman (left quad strain) continues to make progress in his rehab and Baker is cautiously optimistic. ''I told him whatever time period that he has for himself, to add a couple days to make sure that (he's) ready timing-wise to hit in the middle of the order hopefully again,'' Baker said. ''He's always going to say he's ready but I want him really ready.''

Giants RHP Logan Webb (4-3, 3.36 ERA) has no-decisions in each of his previous four starts, although he hasn't lost since May 5. Astros RHP Luis Garcia (7-5, 3.19) is coming off one of his worst outings this season when he had nine strikeouts but allowed six runs (five earned) in 4 2/3 innings against Seattle.