Starling Marte traded by Marlins to A’s for LHP Luzardo 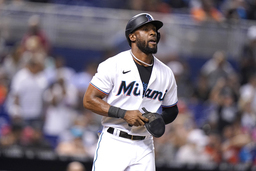 MIAMI (AP) Outfielder Starling Marte was traded Wednesday by the Miami Marlins to the Oakland Athletics for left-hander Jesus Luzardo.

Miami made the deal after it was unable to reach an agreement with Marte on a contract extension.

Luzardo is 2-4 with a 6.87 ERA in 13 games, including six starts. He was sidelined for four weeks in May after he broke the pinkie on his pitching hand when he thumped a table while playing a video game.

Oakland began the day six games behind Houston in the AL West. The Marlins are last in the NL East and expected to make more moves before the trade deadline Friday.

Marte was an All-Star for Pittsburgh in 2016, and the A's are his fourth team. He joins an outfield that also includes Ramon Laureano and Mark Canha.