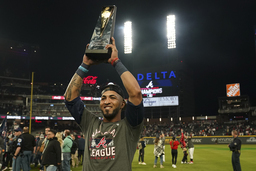 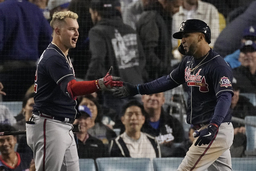 Little did he know.

Rosario, Duvall and Pederson combined to drive in 17 of Atlanta's 28 runs in its six-game NL Championship Series win over the defending champion Los Angeles Dodgers. Rosario was selected MVP as the Braves advanced to a World Series matchup against the Houston Astros starting Tuesday night.

Pederson especially has been a pearl of an addition. Even before the Braves tried to earn the team's first World Series championship rings since the Greg Maddux, Tom Glavine, John Smoltz and Chipper Jones club of 1995, he became known for perhaps the most-seen strand of pearls since Jackie O's.

Anthopoulos, a 44-year-old Canadian hired as general manager in November 2017 and promoted to president of baseball operations last year, had to remake his outfield in midseason.

Opening day center fielder Cristian Pache injured his right hamstring on May 13 and didn't have another big league at-bat until October. Left fielder Marcell Ozuna broke his left middle and ring fingers with a headfirst slide on May 25, then was arrested four days later on charges of aggravated assault and hasn't returned. Star right fielder Ronald Acuna Jr. tore his right anterior cruciate ligament on July 10, an injury sidelining him until next year.

Many GMs make midseason additions. Seldom do so many jell.

With the deal for Pederson, Anthopoulos sent the clubhouse a message ''that we believe in you,'' recalled star first baseman Freddie Freeman, the reigning NL MVP.

Anthopoulos had gone to his boss, chairman Terry McGuirk, for permission to spend and lifted payroll from $136 million on opening day to $149 million on Aug. 31, still 14th among the 30 teams. The four outfield acquisitions added $7,743,280, factoring in $500,000 that Atlanta is receiving from Cleveland this year as part of the Rosario trade.

''Terry McGuirk came to me at the All-Star break and said you got whatever you need to go make this club better. Whatever you need. And we went full-speed ahead,'' Anthopoulous said.

Atlanta lost at Milwaukee hours after the trade deadline, dropping to 51-54. The Braves were third in the NL East, five games back of the New York Mets, one game behind Philadelphia and two games in front of Washington.

Atlanta won five of its next six games to move above .500 for the first time all season on Aug. 8. A nine-game winning streak lifted the Braves into first place on Aug. 15.

''It's two different teams, really, from the first half to the second half, if you really look at it,'' the reigning NL MVP said. ''So we just had little weapons waiting in the wings all over the place and then we unleashed them and here we are sitting in the World Series.''

An improbable fourth straight division title was clinched on Sept. 30 with three games to spare. The Braves finished with a 6 1/2-game lead.

''Even teams that don't have great years get on a run. Even the bad teams. We hadn't got on a run yet and we weren't a bad team. We just had a hard time putting everything together for an extended period of the season,'' Snitker said. ''But we were a good team and I just kept thinking, man, our best baseball's ahead of us at some point in time, and then I think Alex helped that out a lot with the acquisitions.''

Rosario was on the injured list with an oblique strain when the Braves got him for Cleveland for infielder Pablo Sandoval, who was immediately released. Rosario made his Braves debut on Aug. 28, and hit .271 with seven homers and 16 RBIs in 96 at-bats.

''I think this year has been a testament to how we have handled adversity and how we've turned the page and just kept grinding, kept working,'' Duvall said. ''One of our mottos is just show up and work, show up and get better, show up, put your best foot forward, show up and compete.''