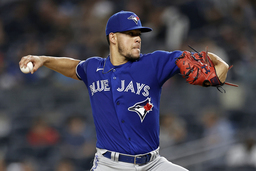 Toronto began the day one game behind AL wild-card leader Boston and a half-game ahead of the third-place New York Yankees.

Vladimir Guerrero Jr. had three hits and an RBI as the Blue Jays improved to 15-3 in September.

Traded to Toronto on July 30 after six seasons with the Twins, Berrios (12-9) faced his ex-teammates for the first time. He allowed three runs and four hits to win for the fourth time in five starts, and improved to 5-3 with a 3.39 ERA in 10 starts with the Blue Jays.

Berrios left to a standing ovation after giving up Ben Rortvedt's solo home run in the seventh.

Trevor Richards struck out three of the four batters he faced and Jordan Romano finished for his 19th save in 20 chances.

Minnesota lost for the sixth time in eight games.

With an off day Monday, Twins manager Rocco Baldelli decided to empty his bullpen for the series finale. Minnesota opened with right-hander Luke Farrell, who hadn't allowed a run in three September appearances.

Farrell (1-1) struck out George Springer to begin the game, but the Blue Jays followed with seven straight hits. Marcus Semien doubled and scored on Guerrero's single, and Bichette followed with his 26th home run. Toronto's 237 homers are the most in the majors.

Four more singles followed, including RBI hits by Lourdes Gurriel Jr. and Breyvic Valera, before Danny Jansen grounded into a fielder's choice and Farrell retired Springer for a second time to end the inning.

Minnesota's Nick Gordon hit a two-run double off Berrios in the fourth.

Twins: RHP Joe Ryan is scheduled to start Wednesday against the Cubs. Ryan left last Tuesday's start against Cleveland after being struck on the wrist by a batted ball. . Josh Donaldson was hit on the right elbow by a pitch from Berrios in the fourth but finished the game.

Blue Jays: LHP Robbie Ray (12-5, 2.64) starts Monday in the opener of a three-game series at Tampa Bay. Ray is 2-1 with a 1.85 ERA in five starts against Tampa Bay this season. The Rays have not named a starter.