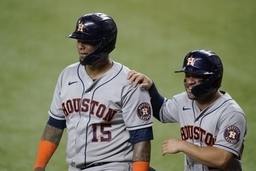 Houston Astros' Martin Maldonado (15) and Jose Altuve, right, celebrate after scoring on an Alex Bregman single in the sixth inning of a baseball game against the Texas Rangers in Arlington, Texas, Thursday, Sept. 16, 2021. (AP Photo/Tony Gutierrez) 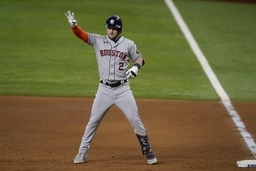 Houston Astros' Alex Bregman gestures after his two-run single during the fourth inning of the team's baseball game against the Texas Rangers in Arlington, Texas, Thursday, Sept. 16, 2021. (AP Photo/Tony Gutierrez) 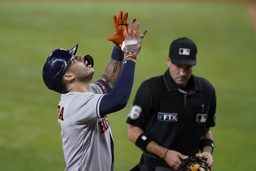 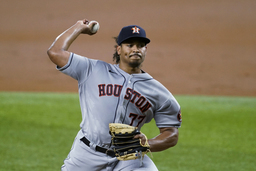 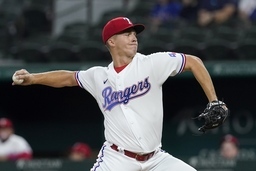 ARLINGTON, Texas (AP) Carlos Correa and the Houston Astros are closing in on another AL West title after dominating their last-place Texas rival again.

Manager Dusty Baker just isn't sure how much his club is paying attention to the standings.

Correa triggered a seven-run fourth inning with a three-run homer, replacement starter Luis Garcia took a shutout into the sixth, and the Astros beat the Texas Rangers 12-1 on Thursday night.

The division-leading Astros stayed seven games in front of Oakland with 16 games remaining. They took three of four in their final series with the last-place Rangers.

Houston is headed home for three against Arizona, which has the worst record in the National League. The magic number for the 2017 World Series champs to clinch a fourth division title in the past five seasons is 10.

''I haven't heard anybody discuss that or talk about it at all,'' Baker said. ''We're just going out there and playing ball. Whatever that number is, you're just trying to win and finish strong.''

Alex Bregman had the first of his pair of two-run singles during Houston's big fourth. Yordan Alvarez lined an RBI double over leaping right fielder DJ Peters, and Yuli Gurriel's second single of the inning scored Bregman. Chas McCormick's 12th homer was a two-run shot in the eighth.

Garcia (11-7) started after left-hander Framber Valdez was scratched because of a cut on the index finger of his pitching hand. The injury happened when Valdez put his hand on the outfield wall during batting practice Wednesday at the year-old home of the Rangers.

A strong contender for AL Rookie of the Year with 26 starts in his first full season, the 24-year-old Garcia allowed a run and five hits in 5 1/3 innings. The run scored on an groundout from Willie Calhoun, the first batter to face reliever Yimi Garcia.

''He's been unbelievable for us,'' Bregman said. ''He works extremely hard on the days he's not pitching. Super happy for him. I think he would win rookie of the year.''

Texas rookie Glenn Otto, who pitched five scoreless innings against his hometown team in his major league debut last month, added three more before the 25-year-old right-hander allowed nine of 10 Houston batters to reach in the fourth and was replaced.

Otto (0-2) allowed seven hits and seven runs in 3 1/3 innings, pushing his ERA to 9.37 despite the former Rice pitcher's impressive debut against the Astros.

''I wasn't quite getting ahead of as many guys tonight from the get-go and was able to fight through it those first three innings,'' Otto said. ''I need to keep them trying to hit my pitches as much as possible. The execution on that front wasn't very good tonight.''

Correa's 23rd homer - and first surrendered by Otto in the majors - followed a leadoff single by Gurriel and Kyle Tucker's double. Otto struck out Jose Siri before walking the bases loaded for Bregman, who singled to left. Alvarez and Gurriel added their run-scoring hits before Tucker grounded into a double play.

Despite an 8-1 loss in the second game of the series, the Astros outscored the Rangers 35-12 in the four games.

''We always talk about passing the torch to the next guy, trying to continue good at-bat after good at-bat,'' said Bregman, whose four RBIs matched his season high. ''When we do that, I think we're an extremely good offense.''

The Astros had long since clinched a fifth consecutive ''Silver Boot'' trophy, which goes to the winner of the season series between the Lone Star State rivals. Now Houston has a franchise-best 14 victories over the Rangers, finishing with a 14-5 edge. The margin over the five seasons is 56-30.

Astros: Valdez cut the same finger he broke early in spring training when he was hit on the hand by a line drive from Francisco Lindor of the New York Mets. The 27-year-old missed the first two months of the season.

Astros: RHP Brandon Bielak (3-3, 4.47 ERA) is set for his first start of the season in Friday's opener against the Diamondbacks. Baker said Valdez would probably start again Monday.

Rangers: LHP Taylor Hearn (6-4, 3.99 ERA) is set for the opener of a three-game series at home against AL Central-leading Chicago. The White Sox swept three from the Rangers at home in the only other meeting in April.