Banged-up Mets get Conforto back, good news on Stroman 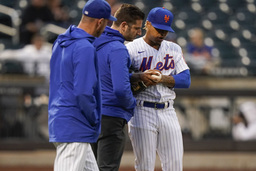 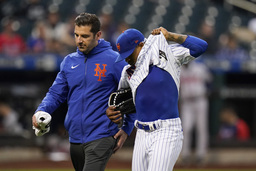 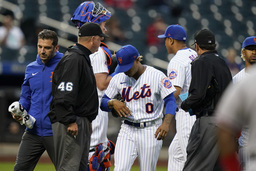 NEW YORK (AP) Marcus Stroman is optimistic he can make his next scheduled start for the New York Mets after an MRI showed no damage to his sore left hip.

That was good news for the depleted Mets, who reinstated right fielder Michael Conforto from the injured list Wednesday - one of eight roster moves the banged-up NL East leaders made before their series finale against Atlanta.

Conforto had been sidelined since straining his right hamstring on May 16. He was ready to return Tuesday but wasn't activated after Triple-A Syracuse's game was postponed to allow for more COVID-19 testing and contact tracing within the organization. Conforto spent last weekend on a rehab assignment with Syracuse, so the Mets said they decided not to reinstate him Tuesday ''out of an abundance of caution.''

The outfielder said Wednesday he tested negative three times and was feeling good. He batted third against Braves starter Kyle Wright and lined a double into the right-field corner his first time up before scoring on a groundout.

Stroman, the team's most durable starting pitcher this season, exited Tuesday night's outing in the second inning because of his aching hip.

Mets manager Luis Rojas said Stroman remained sore Wednesday, but it was a relief to learn the MRI came back clean. He will receive treatment, and New York hadn't ruled him out for Sunday against Philadelphia.

Tylor Megill's contract was selected from Syracuse and the right-hander started Wednesday night against the Braves in his major league debut. Megill pitched in place of Joey Lucchesi, transferred to the 60-day injured list ahead of season-ending Tommy John surgery scheduled for Thursday.

New York also put second-string catcher Tomas Nido on the 10-day injured list, retroactive to Tuesday, with a bruised right wrist. The Mets have 13 players on the IL.

Right-hander Corey Oswalt was selected from Syracuse, and reliever Robert Gsellman (right lat strain) was moved to the 60-day IL.

Jonathan Villar, who has been filling in nicely at third base for injured J.D. Davis, was out of the lineup for the second consecutive game with a calf issue. Luis Guillorme started at the hot corner again.