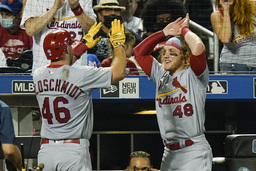 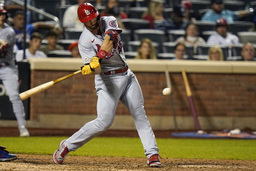 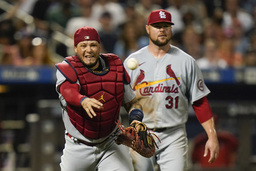 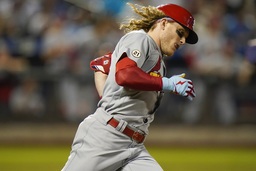 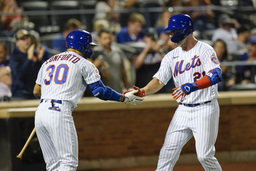 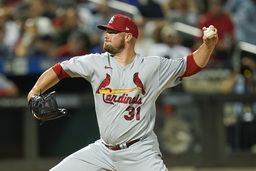 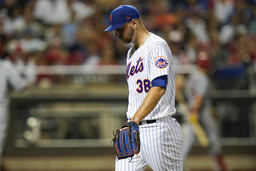 New York Mets relief pitcher Tylor Megill (38) reacts as he walks to the dugout during the first inning of a baseball game against the St. Louis Cardinals Wednesday, Sept. 15, 2021, in New York. (AP Photo/Frank Franklin II) 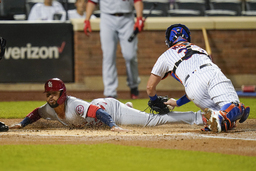 NEW YORK (AP) After a big night back home, Harrison Bader was munching happily on his postgame meal when it was time to field a few questions.

Bader and the streaking Cardinals are starting to taste another trip to the postseason.

Paul Goldschmidt and Nolan Arenado each hit one of St. Louis' four homers, and the Cardinals flashed some fantastic outfield defense in beating the New York Mets 11-4 on Wednesday for their fifth straight victory.

Bader homered, drove in three runs and made a timely grab at the center-field fence in his New York homecoming to help Jon Lester improve to 9-1 against the Mets. Edmundo Sosa also went deep and Goldschmidt had three hits for the Cardinals, who totaled 25 runs in a three-game sweep.

St. Louis, which jumped into playoff position Tuesday night for the first time since May 30, has won seven of eight to move a game ahead of San Diego for the second NL wild card heading into a pivotal series against the Padres this weekend.

''We're going to have a lot of fun down the stretch,'' Bader said. ''Looking forward to seeing where it ends up.''

Pete Alonso and Kevin Pillar homered for the fading Mets, who appear finished in the pennant race with 15 games to go. They went 1 for 14 with runners in scoring position and dropped five games behind St. Louis, with three teams in between.

''We've got to get real hot,'' said Jeff McNeil, who was a home run short of the cycle. ''We're fighting for our lives now.''

Tyler O'Neill laced a two-run double in a five-run first inning against rookie Tylor Megill (3-5), who was coming off an outstanding start against the Yankees.

Running on an 0-2 pitch, Sosa scored all the way from first base when Bader blooped a two-run single to center.

New York had a couple of chances to get back in it, but Bader and substitute right fielder Lars Nootbaar came through with clutch catches.

The speedy Bader sprinted to the wall near the 408-foot sign and left his feet to snag Javier Baez's long drive with two on to end the fifth.

Nootbaar, moments after entering on defense in a double switch, got pumped up when he robbed Alonso of a three-run homer to keep it 8-4 in the seventh.

''We might still be playing if he doesn't make that catch,'' Bader said. ''He had a big moment there.''

Lester (6-6) allowed three runs - two earned - and six hits in six innings. The 37-year-old lefty struck out seven and walked none, boosting his record to 3-1 in nine outings for St. Louis since his July 30 trade from Washington.

''I thought he was fantastic and gave us everything he had. He was a real pro,'' Cardinals manager Mike Shildt said. ''He got by on stuff and he got by on guts.''

Bader, born in Bronxville just north of New York City, had a cheering section throughout the series. He greeted local Little Leaguers at Citi Field on Monday, joined friends in the stands during batting practice Tuesday and high-fived his parents and uncle Joseph in the front row after hitting a solo homer Wednesday.

''It's really special, there's no doubt about it,'' Bader said. ''I felt really relaxed every time I look over and see my mom in the stands.''

BREAK OUT THE BROOM

It was the Cardinals' first sweep against the Mets since April 2009. The last time they did it in New York was August 2001 at Shea Stadium.

Cardinals: RHP Jack Flaherty will likely throw about 20-25 pitches Thursday in his first bullpen since straining his right shoulder in late August. St. Louis still hopes the front-line starter (9-2, 3.08 ERA) can offer something in relief this year. ''He's willing to do whatever it takes. He just wants to pitch and contribute,'' Shildt said. ... RHP Dakota Hudson (Tommy John surgery) will aim to throw around 75 pitches in a rehab start Friday, his first for Triple-A Memphis after four with Double-A Springfield.

Mets: CF Brandon Nimmo is expected back from the injured list Friday night against Philadelphia, two weeks after straining his right hamstring. ... Noah Syndergaard threw about 15-20 pitches to Nimmo and might have another live batting practice session before heading out on a minor league rehab assignment. The right-hander has been slowed in his recovery from March 2020 Tommy John surgery by a sore elbow and a positive COVID-19 test. He hopes to return in a relief role before the season ends. ... Reserve infielder Jose Peraza was reinstated from the 10-day injured list. Peraza had been out since July 20 with a fractured middle finger on his right hand. OF Albert Almora Jr. was optioned to Triple-A Syracuse.