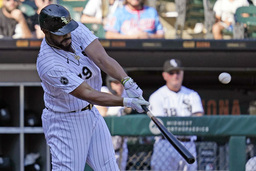 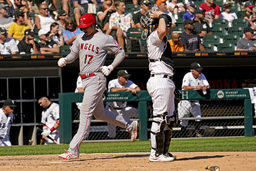 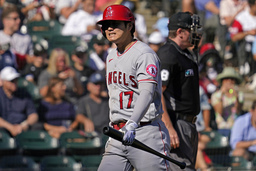 Los Angeles Angels designated hitter Shohei Ohtani, of Japan, reacts as he walks back to the dugout after striking out swinging during the seventh inning of a baseball game against the Chicago White Sox in Chicago, Thursday, Sept. 16, 2021. (AP Photo/Nam Y. Huh) 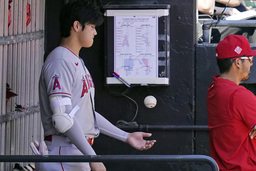 Los Angeles Angels designated hitter Shohei Ohtani, of Japan, plays with a ball in the dugout during the second inning of a baseball game against the Chicago White Sox in Chicago, Thursday, Sept. 16, 2021. (AP Photo/Nam Y. Huh) 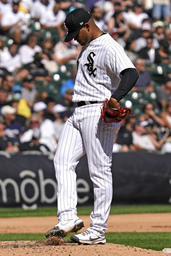 Chicago White Sox starting pitcher Reynaldo Lopez looks down as he kicks the mound during the fourth inning of a baseball game against the Los Angeles Angels in Chicago, Thursday, Sept. 16, 2021. (AP Photo/Nam Y. Huh) 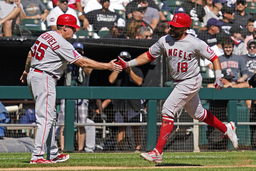 Cobb was activated from the 10-day injured list after suffering right wrist inflammation and allowed two hits in his first start since July 23.

The Angels (72-74) won their second consecutive game. The White Sox (83-63) lost for the fifth time in eight games. The AL Central-leading White Sox have dropped six consecutive series against the Angels dating to 2016, and they're 4-15 in their last 19 games against them.

Cobb (8-3) allowed only two baserunners to advance as far as second base, and he induced inning-ending double plays in the second and fourth innings.

''I was hoping for good, but I wasn't expecting that,'' Angels manager Joe Maddon said.

Entering Thursday's game, Cobb was 0-3 with a 10.70 ERA in four career starts against the White Sox.

''I didn't think I was going to work that deep into the game,'' said Cobb, who said he struggled with his location and command during two batting practice sessions prior to being activated. ''I thought it would be a challenge but was able to pound the zone for the most part.''

Chicago starter Reynaldo Lopez (3-3) allowed a season-high seven runs in his seventh start of the season. Lopez had allowed two home runs in his previous 30 innings prior to surrendering homers to Rengifo and Rojas.

The White Sox committed three errors, including two during a five-run fourth capped by Rojas' two-run homer. Shortstop Tim Anderson bobbled a grounder but was assessed an error even after second baseman Cesar Hernandez was late in covering second base for a potential force play.

That led to a three-run double by Jack Mayfield, who advanced to third after the throw from left fielder Eloy Jimenez skipped past home plate.

Anderson committed a throwing error in the seventh, marking his first multi-error game since Aug. 25, 2019, against Texas.

Chicago's three errors were one shy of its season high against Toronto on June 9.

Chicago reliever Mike Wright was ejected for hitting Angels slugger Shohei Ohtani in the calf with a pitch with two out and nobody on in the ninth. La Russa also was ejected by crew chief Bill Welke for arguing.

''It wasn't intentional,'' La Russa said. ''(Welke) read it wrong. It wasn't consistent with No. 1, the way they treated the three hit by pitches. Secondly, where was our retaliation?

''It looks bad to our pitcher and our team. It's disappointing.''

It marked the third ejection of the season for La Russa and the 91st of his career.

Rookie infielder Romy Gonzalez moved from third to pitcher and struck out Max Stassi to end the ninth. Abreu made his first major league appearance at third in place of Gonzalez.

''Is there any doubt that he would do whatever?'' La Russa said. ''If they're all like him, all our jobs would be easier.''

Abreu drove in two runs, increasing his season total to 109.

White Sox catcher Yasmani Grandal, who has a personal-best streak of reaching base safely in 30 consecutive games, received a rest.

Angels RHP Jake Petricka was designated for assignment to make room for Cobb.

Angels: Ohtani won't pitch as planned Friday because of a sore right arm that could sideline him as a pitcher for the rest of the season, according to manager Joe Maddon. Ohtani is not planning to see a doctor. ... RHP Jose Marte (COVID-19 IL) is expected to be activated Friday. Marte has been on the IL since Aug. 22. RHP Austin Warren (COVID-IL) is expected to return next week, Maddon said.

White Sox: LHP Carlos Rodon (12-5, 2.38) won't pitch until next week's series at Detroit to protect his left shoulder. Rondon had a start skipped earlier this month and hasn't pitched since Sept. 10, a five-inning outing against the Boston Red Sox. La Russa said Rodon will pitch twice in the next two weeks. That schedule would give him ample rest in the likely event the Sox open the playoffs on Oct. 7. Rodon has thrown 124 2/3 innings this season, compared with 42 1/3 innings over the previous two seasons due to Tommy John surgery.