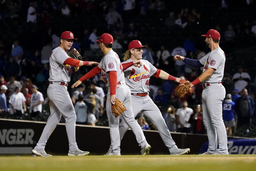 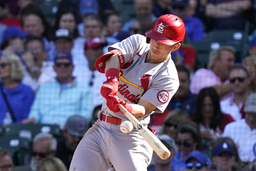 St. Louis Cardinals' Tommy Edman hits a one-run single during the sixth inning in the first baseball game of a doubleheader against the Chicago Cubs in Chicago, Friday, Sept. 24, 2021. (AP Photo/Nam Y. Huh) 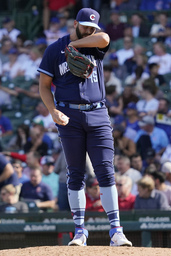 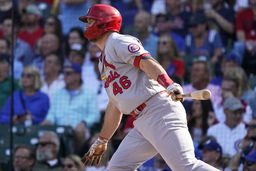 St. Louis Cardinals' Paul Goldschmidt watches his one-run single during the sixth inning in the first baseball game of a doubleheader against the Chicago Cubs in Chicago, Friday, Sept. 24, 2021. (AP Photo/Nam Y. Huh) 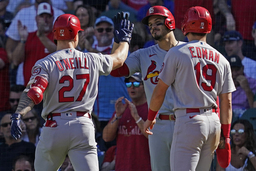 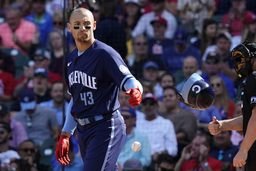 Chicago Cubs' Trayce Thompson throws his helmet after striking out swinging during the fourth inning in the first baseball game of a doubleheader against the St. Louis Cardinals in Chicago, Friday, Sept. 24, 2021. (AP Photo/Nam Y. Huh)

CHICAGO (AP) The surging St. Louis Cardinals emphatically matched a team record with their 14th straight win on Friday night, pounding the Chicago Cubs 12-4 in the second game of a doubleheader behind Tyler O'Neill's three-run homer and a pair of solo shots by Lars Nootbaar.

Harrison Bader added a solo drive, double and single as St. Louis batters went deep five times in the nightcap to sweep the twinbill and equal a run set in July 1935. The win streak has rocketed the Cards into control of the second NL wild card, leading Philadelphia by five games.

Paul DeJong also went deep and Nootbaar added a single for three hits in his first multihomer game as St. Louis pulled away. O'Neill's homer was his 31st of the season, second of the day and 10th in September.

Manager Mike Shildt said the victory mirrored a collective approach that has made the Cardinals suddenly look formidable down the stretch.

''Today and the whole time, it's been a complete team effort,'' Shildt said. ''Across the board, if you look today, you can pretty much name everybody.

''It's a special group. You've got real pros. When you've got that consistency, special things happen.''

The Cardinals' marquee names are coming through with big numbers. The rotation is getting healthy. Depth players, like Nootbaar, a 24-year-old rookie, are stepping up.

''Everybody is kind of feeding off each other's energy right now,'' said Nootbaar, an outfielder who hit his fourth and fifth homers in his 52nd game. ''You want to join the party, kind of. When you're loose and playing your game, you think you can beat anybody.''

The Cardinals powered past the Cubs 8-5 in the opener, riding O'Neill's and Paul Goldschmidt's 30th homers and Jose Rondon's pinch-hit two-run shot.

O'Neill, a 26-year-old Canadian enjoying a breakout season, followed up with a drive to left center in the second inning of the second game to put St. Louis ahead 6-2. Goldschmidt added a pair of singles and an RBI double in the nightcap to give the veteran first-baseman 11 hits - including four homers -in 18 at-bats in his last four games.

Patrick Wisdom launched his 28th homer and fellow Cubs rookie Frank Schwindel extended his hitting streak to 13 games with a double and a single. Chicago lost its fourth straight and eighth in nine.

St. Louis starter Jack Flaherty retired just one of four batters he faced in a pitch-count restricted return from a right shoulder strain that had sidelined him since Aug. 25. The right-hander tossed 19 pitches, yielding three runs on two hits - including Wisdom's two-run shot deep to center.

Dakota Hudson (1-0), also reinstated from injured list on Friday, replaced Flaherty and allowed two runs on four hits in 3 2/3 innings for the win. Hudson, recalled as the 29th man for the doubleheader, made his first appearance since Tommy John surgery in September 2020.

''It was just great being able to get back out there,'' Hudson said. ''I was able to prepare well and Yaddy (catcher Yadier Molina) was running the show for me.

''Just trusting the defense, being me and seeing what I can do, it was a blast to get back.''

Chicago's Zach Davies (6-12) was roughed up for the fourth straight start and lost his sixth consecutive decision. The wiry right-hander allowed six runs on seven hits and two walks in two innings.

The Cards scored three times in the first before Wisdom's shot in the bottom half closed it to 3-2.

O'Neill's drive opened it to 6-2 in the second. Nootbaar and DeJong homered back-to-back to make it 8-2 in the third.

Bader and Nootbar hit consecutive solo drives in the seventh

The Cardinals' only road wins during their 1935 streak came in a doubleheader at Wrigley on July 4.

Goldschmidt has homered eight times in September to give him 30 or more in six seasons.

Goldschmidt and O'Neill joined Cardinals third-baseman Nolan Arenado with 30 or more homers. It's the second time St. Louis has had three hitters with 30 or more. In 2004, Albert Pujols (46) , Jim Edmonds (42) and Scott Rolen (32) combined.

Veteran left-hander Jon Lester is slated to start Saturday against the Cubs, one of his former teams, for the first time since he was traded to the Cardinals.

Lester, who helped anchor Chicago's rotation from 2015 through 2020, earned his 200th career win on Monday at Milwaukee. The Cubs recognized Lester's milestone on the videoboard in left before the second inning of the first game and he doffed his cap from the dugout.

Lester began the season with Washington, and he lost at Wrigley Field on May 17 in his return to the ballpark. He is 3-0 with a 2.27 ERA in his last six starts.

Cubs manager and former catcher David Ross had dinner with his former battery mate on Thursday. They won't be so chummy on Saturday

''I love Jon Lester like a brother, but I want to kick his tail every time he's out there,'' Ross said.

Cardinals: SS Edmundo Sosa was in the right hand by a pitch in the sixth first game and left the game. X-rays were negative, but manager Mike Shildt said Sosa might miss up to five games

Cubs: Placed C Robinson Chirinos on the 10-day injured list with a left oblique strain and recalled outfielder Greg Deichmann from Triple-A Iowa. Ross said Chirinos will miss the remainder of the season. RHP Jason Adam was promoted from Iowa to serve as the 29th man for the doubleheader and struck out the side in the seventh in the first game. Adam came back after a gruesome left ankle break - the bone tore through his skin - in the minors in May.