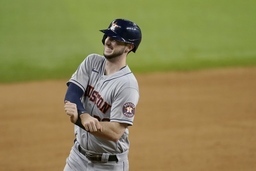 Houston Astros' Kyle Tucker gestures to the team's dugout as he rounds the bases after hitting a solo home run in the eighth inning of a baseball game against the Texas Rangers in Arlington, Texas, Wednesday, Sept. 15, 2021. (AP Photo/Tony Gutierrez) Houston Astros' Marwin Gonzalez kneels by the plate after being hit in the bottom right leg by a pitch thrown by Texas Rangers starter Kohei Arihara in the fourth inning of a baseball game in Arlington, Texas, Wednesday, Sept. 15, 2021. Gonzalez remained in the game. (AP Photo/Tony Gutierrez) Houston Astros' Chas McCormick (20) follows through on a two-run single in the fourth inning of a baseball game against the Texas Rangers in Arlington, Texas, Wednesday, Sept. 15, 2021. The hit scored Kyle Tucker and Yuli Gurriel. (AP Photo/Tony Gutierrez) 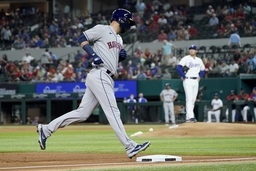 ARLINGTON, Texas (AP) Jake Meyers and Marwin Gonzalez hit consecutive homers in a three-run second inning, Kyle Tucker homered among his three hits, and Jose Urquidy allowed one run and two hits in six innings for his first win since June 23 as the Houston Astros beat the Texas Rangers 7-2 on Wednesday night.

Urquidy (7-3) struck out six and walked one in beating Texas for third time in four career starts, helping the AL West-leading Astros win for the third time in four games. It was the longest of Urquidy's three September starts after missing two months with a shoulder injury.

Astros manager Dusty Baker was impressed by both Urquidy's command and maintaining his velocity.

''The last time out, his velocity dropped like the third or fourth (inning),'' Baker said. ''He had a very good changeup, and his slider was good. Just an overall good performance.''

Urquidy, from Mexico, said he was proud to win on Sept. 15, because it's both Mexico's independence holiday and the major leagues' Roberto Clemente Day.

Meyers' solo shot, his fifth of the season, broke an 0-for-12 skid. Gonzalez's homer was his fourth of the season and his second homer and second hit since rejoining the club Sunday.

Tucker hit a leadoff homer in the eighth, his 26th, after singling in the second and doubling in the fourth. He also scored three runs.

Chas McCormick hit a two-run single and Yordan Alvarez had an RBI double.

Brock Holt scored Texas' first run in the third inning on a groundout after hitting his first triple since Aug. 2019. Willie Calhoun, who DH'ed in his first game since suffering a fractured forearm on June 26, went 2 for 4, accounting for half of the Rangers' hits.

Kohei Arihara (2-4) didn't retire a batter in the fifth inning, and was pulled after three batters. Making his third start since undergoing shoulder surgery in May, Arihara allowed six runs on eight hits and hit two batters.

Urquidy retired 11 straight after Holt's triple, until a two-out single in the sixth by Calhoun.

Holt tripled to deep right when Tucker couldn't make a backhand catch on the warning track while running toward the wall and hitting face-first. Holt was activated from the COVID-19 list on Tuesday and played his first game since Aug. 21.

McCormick's hit in the fourth inning came on a 2-2 pitch, after Arihara stepped off the pitching rubber twice, prompting boos from the home crowd.

''When things aren't going well (for Arihara), everything slows down,'' Texas manager Chris Woodward said. ''It's something he's got to work on.''

Rangers C Jose Trevino, the team's nominee for the Roberto Clemente Award, described the relationship he'd built with Daniel Flagg, a 17-year-old catcher for Pilot Point High School in northern Texas who died in a drowning accident on July 29.

''I gave him catching lessons. I connected with him really well,'' Trevino said before the game. ''When I got the news that he passed away, it hit home. We don't realize how much of an impact as a professional we have on people.''

Tucker is hitting .420 in his last 19 games. . Regular Astros SS Carlos Correa and 3B Alex Bregman were given the night off and are scheduled to return for Thursday night's series finale. . Arihara has allowed 20 earned runs in 17 2/3 innings in five home starts this season, a 10.17 ERA. . Astros RHP Rafael Montero was transferred to the 60-day IL, and INF Robel Garcia was designated for assignment. 1B Taylor Jones and RHP Andre Scrubb were activated off the 10-day injured list and optioned to Triple-A Sugar Land.

Astros: OF Michael Brantley (right knee soreness) was placed on the 10-day injured list retroactive to Monday. . Manager Dusty Baker said RHP Jake Odorizzi (right foot soreness) was walking better than expected but had no timetable on his return.