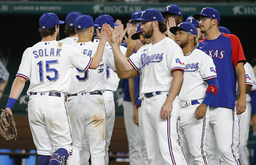 The Texas Rangers celebrate a win over the Chicago White Sox in a baseball game, Saturday, Sept. 18, 2021, in Arlington, Texas. (AP Photo/Brandon Wade) 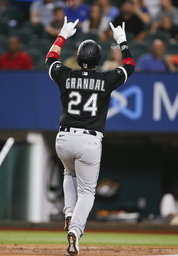 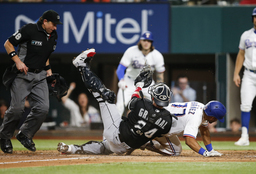 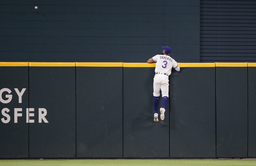 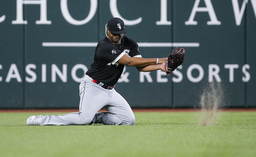 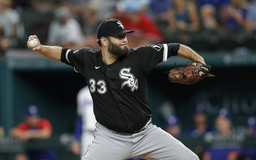 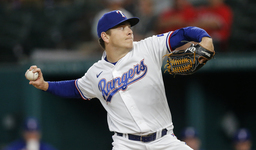 ''It was typical of what I thought of Lance,'' Rangers manager Chris Woodward said. ''I knew he wouldn't give up a ton of runs, but we got just enough.''

Chicago's magic number over Cleveland to clinch the division remained at five.

Five pitchers combined on a three-hitter in ending a three-game Texas skid. Yasmani Grandal hit his 21st home run in the sixth.

Peters greeted reliever Garrett Crochet with a single that brought home Nathaniel Lowe. Andy Ibanez was thrown out at the plate on the play by center fielder Luis Robert.

Both Texas runs were charged to Lynn (10-5). It was his first appearance against his former club after being traded last December and his second start following a trip to the 10-day injured list with right knee inflammation.

''Whenever you come back to a place you played, it's always fun,'' Lynn said. ''It's actually the first time I've played in this ballpark with fans in it. Fun to see fans instead of cardboard cutouts.''

In losing the previous three games, all at home, Texas averaged giving up one run per inning - outscored 27-3.

The White Sox left nine runners on base and were 0-for-5 with runners in scoring position.

''They got their hit at the right moment, and we couldn't capitalize,'' Cairo said.

Romy Gonzalez was left at second in the seventh when Yoan Moncada's deep drive to right was caught at the wall by Adolis Garcia. Two runners were left in the eighth when Leury Garcia's smash toward right was grabbed by leaping second baseman Nick Solak.

The Rangers took their first lead in four games in the fourth inning, thanks to an error by second baseman Gonzalez and a successful challenge that turned Jonah Heim's inning-ending double-play grounder into a fielder's choice to score an unearned run.

Grandal's homer came on Anderson's first pitch of the sixth and cleared the 407-foot marker in straightaway center field. It was Chicago's second hit, the first being Robert's single leading off the game.

Texas starter Spencer Howard was pulled after three scoreless innings and 57 pitches, the most he's thrown in any of his six starts since being acquired at the trade deadline from Philadelphia. Howard allowed only Robert's single plus three walks.

Lynn gave up six hits and struck out five in 5 1/3 innings.

Rangers SS Isiah Kiner-Falefa, last year's AL Gold Glove winner, was charged with throwing errors in the first and second innings for his relays on attempted double plays. His first one pulled Lowe off first base. His second sailed over the glove of Howard covering the base after Lowe initiated the play with a throw to second.

Barlow has pitched 6 1/3 scoreless innings in his last seven appearances. . Cairo's White Sox won his only previous appearance as interim manager, the ''Field of Dreams'' game against the New York Yankees on Aug. 12, when La Russa attended a family funeral. . Ibanez, who came off the IL on Friday, had multiple hits for the eighth time in nine games. . Moncada extended his on-base streak to 27 games.

Sunday afternoon's rubber game will match White Sox RHP Lucas Giolito (9-9, 3.77 ERA) against Rangers RHP Jordan Lyles (9-11, 5.20). Giolito is 1-3 in his last nine starts with four straight no-decisions. Lyles will try to win for his fourth straight start after allowing only one run over his last two outings.