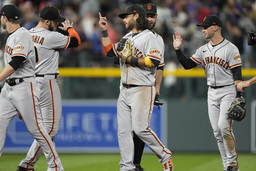 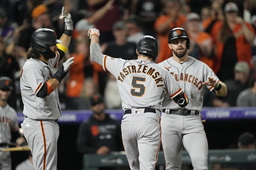 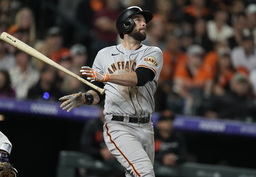 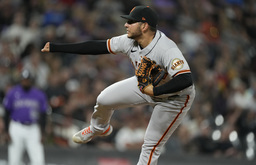 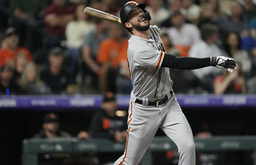 San Francisco Giants' Kris Bryant flies out against the Colorado Rockies in the fourth inning of a baseball game Friday, Sept. 24, 2021, in Denver. (AP Photo/David Zalubowski) 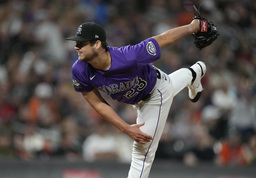 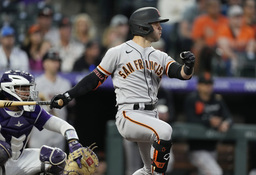 DENVER (AP) The San Francisco Giants reached one milestone and are close to another in their resurgent season. The real goal is another World Series title.

San Francisco started the night leading the Dodgers by a game, with Los Angeles playing later at Arizona. The Giants have won 16 of 20.

The Giants haven't won the NL West since 2012, when they captured the second of three World Series titles in a five-year span. Coming into the season, they were lightly regarded with the Dodgers and San Diego Padres getting most of the attention, but they've surprised many.

''It's a big deal,'' manager Gabe Kapler said of winning 100 games. ''We know our division is extraordinarily talented, but we also know that we're talented. Our goal was to win the division and not just sneak into the playoffs.''

San Francisco blew it open in the seventh. Yastrzemski followed singles by Brandon Crawford and Evan Longoria with his 25th homer off reliever Ashton Goudeau (1-1). The Giants tacked on another on Buster Posey's RBI single.

Tommy La Stella, Crawford and Brandon Belt had solo home runs to give San Francisco a 3-2 lead after six. La Stella and Crawford had three hits each and Belt finished with two.

San Francisco has 234 home runs, one fewer than the club record set in 2001 when Barry Bonds hit 73. The Giants lead the NL in homers and are second in the majors to Toronto's 241 despite not having a player hit more than 27 this season.

Three players - Belt, Crawford and Yastrzemski - have 22 or more, and seven other players have reached double digits in home runs.

''So many of the home runs have been meaningful,'' Kapler said. ''I can't help but think of the ones that changed a game for us. We're getting contributions from everyone on our roster.''

Colorado's Peter Lambert made his first start since Sept. 20, 2019. He had Tommy John surgery in July 2020 and worked his way back to the rotation.

He allowed two runs on four hits 3 2/3 innings. La Stella hit his second pitch of the game into the seats in left and Crawford blasted his 22nd of the year into the second deck in right in the second inning.

''Rude awakening, I guess,'' Lambert said of La Stella's homer. ''It is what it is. A poorly located fastball on a 1-0 count and he took advantage.

''I was happy to be back out there, that's for sure. I was pretty amped up.''

The Rockies scored their runs in the first inning off of starter Alex Wood with RBI singles by Charlie Blackmon and Elias Diaz.

ANOTHER ONE FOR THE BOOKS

The team home run record isn't the only one the Giants are chasing. San Francisco can still match the 1904 New York Giants' 106 win total with a strong finish. The Giants would need to finish 6-2 to catch the 1904 team.

San Francisco signed outfielder Ka'ai Tom to a minor league deal Friday and will report to Sacramento. Tom hit .152 in 48 games with Pittsburgh and Oakland this season.